Are you storing your food wrong?

Mould is the No.1 reason we throw food away — and 1.3 billion tons of food is wasted every year — so a lot of us must be.

Fresh fruit and veg should be a part of all our diets but if they’re rotting in a few days and we’re throwing it away, what’s the point?

Here’s the thing though: it’s 100% in our control how we store our food. Storing correctly can cause food to last longer, taste better, and save us more trips to the supermarket. So, doing it correctly is going to save us cash, waste, and time. Let’s get to it. 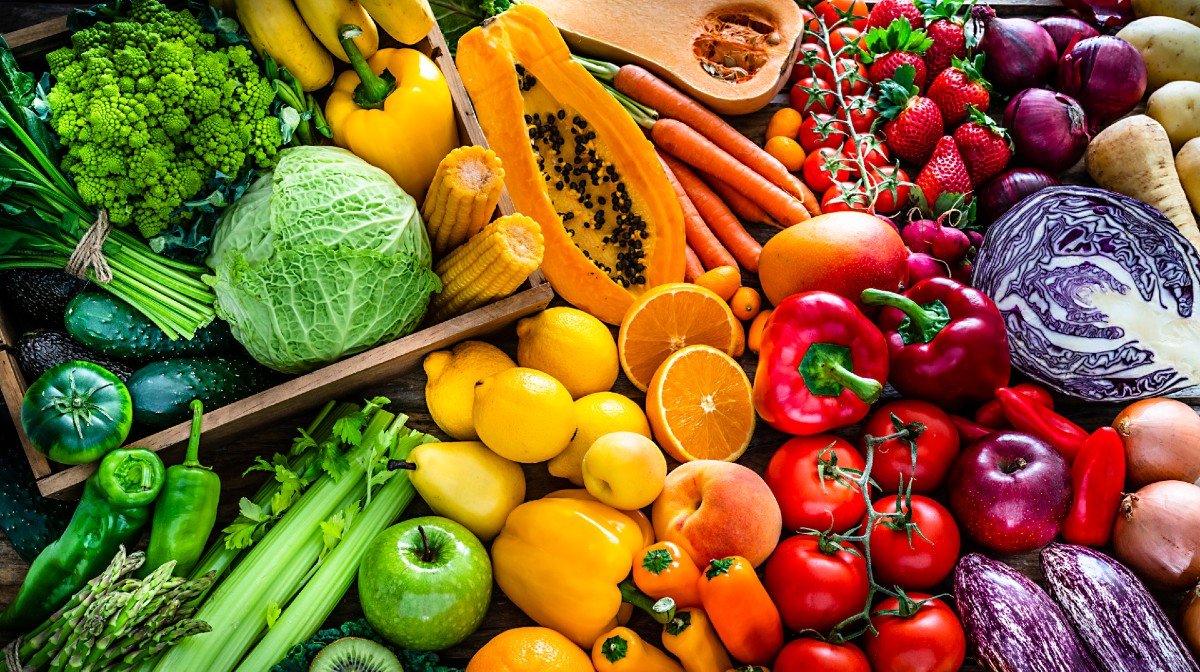 1 in 6 pints of milk around the world are wasted.1 Globally, a lot of this is at farms, but in the UK most happens in supermarkets and in our homes. Basically milk goes off really easily. Because of this, you want to do everything you can to keep it going as long as possible.

Where do most of us keep our milk though? In the place that makes the most sense: the fridge door.

The problem is your fridge door’s the warmest part of your fridge. The constant opening and closing of the fridge door lets warm air rush in. So keeping it in the warmer door means it won’t last as long.

The coolest part of your fridge is at the bottom-back, so start putting your milk as low down and as far back as possible to get it lasting a little longer.

Wonder why your sprouts are growing sprouts?

Keeping onions and potatoes together makes them go moist. It also releases a rotting-gas called ethane (also known as ethylene), which causes fruits and veg to ripen faster.

Some people believe this is why your potatoes get sprouts growing on them. Those shoots actually contain glycoalkaloid compounds, which are easily toxic from the large amount in the shoots.2 Eating too much can give you stomach aches, fever, and worse.

Don’t worry though, they are still safe to eat if the shoots are small and removed with the skin. Just think twice before throwing your onions in with your taters.

3. Don’t keep avocados in the fridge

Do you leave your avocados in the fridge? Feel like they’re rock-hard when you take them out for some guacamole? Avocados don’t ripen when they’re too cold, so leaving them in the fridge makes them tough to cut and peel. Leave them out for a couple of days so they can ripen quickly.

4. Don’t wash berries when you buy them

Washing fruit is something a lot of us do, but doing so causes them to go off way before the best-before date. Blueberries are one of the worst offenders for this (but also grapes, strawberries, raspberries, and other fruits). Instead, wash them just before you eat them.

Top tip: if you want berries to really last a while, bathe them in a vinegar-water mix for 2-10 minutes and box and fridge them. This removes bacteria and actually can make them last longer.

5. Don’t keep it in the tin after opening

With all the tinned food we’ve been buying recently, this is a must-know.

Once you’ve opened your can of chickpeas (or most other tinned foods) don’t leave any in the tin. Empty it and put them in a bowl to refrigerate. When air gets in, the tin from the can seeps into the contents more quickly. So your food will have more metal in it. Not exactly what you want from your chickpeas.

Freezing or fridging raw potatoes turns the starch into sugar. Most of us keep our potatoes in the cupboard, but in case you do put them in the fridge or freezer, take the raw ones out. It’s okay once they’ve been cooked, so don’t worry too much about the leftovers.

7. Don’t leave frozen veg in the freezer too long

Leaving the vegetables in the freezer for too long leaves them forming ice crystals. These ice crystals are water that was in your veg and has seeped outside.

Even veg that’s been left in the freezer too long can still deteriorate. It’s called freezer burn and it’s the result of dehydration, leaving your veg shriveled and not tasting as nice. So, don’t leave them in for too long — it’s best to eat within 2 to 4 months of buying.

8. Keep your bananas away from other fruit

Don’t put your bananas in the fruit bowl along with the other fruits. They’ll all go off quicker.

But why? Again, just like the onions, it’s the ethane gas.

The gas causes the fruit to ripen and soften by breaking down its cell walls, converting the starches into sugars and making the acids disappear.

While your oranges are safe from ethene, other fruits definitely are not.

Bananas are particularly bad for releasing this gas. So for your fruit bowl, keep the bananas separate. It’ll stop most of the bowl from going brown.

It’s easy to store your food incorrectly. Start throwing the onions in a cupboard by themselves and putting the milk at the back of the fridge and you’ll be throwing out less and less.

Make this an on-going process. Every time you throw something out, find out if you stored it in the correct way. If not, try improving it for next time. See less mould and save more time and money.

What To Eat To Fuel Your Runs

Weightlifters FAQ | How Much Cardio Do You Need?

8 Top Supplements For Runners To Pick Up The Pace

Is Flexibility More Important Than Strength?