People like their bicep to pop, but what about the tricep? In reality, biceps are a small muscle group and if your focus is to get bigger arms, then it is the tricep you should be focused on. One fundamental tricep movement is the tricep pushdown, and this article has you covered on the dos, don’ts and pretty much everything in between.

Roughly two thirds of our arm is made up of the tricep, making it the dominant part of the arm. If we’re looking to improve arm strength, size and appearance as a whole; then the triceps should be at the forefront of all our training plans. 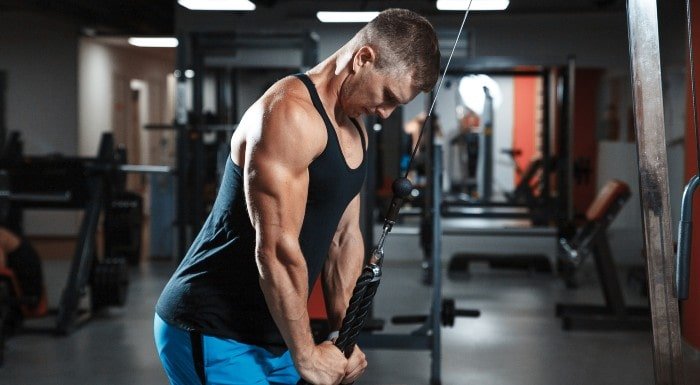 Anatomically speaking, the triceps are made up of three heads, hence the ‘Tri’ implication. The triceps consist of the triceps lateral, medial and long heads.

Lateral head: This is located on the outside of the humerus muscle and is perhaps one of the most important sections as it is what gives the arm the curvature and overall ‘size-able’ appearance when trained properly. If you are looking to develop the infamous ‘horseshoe’ visual effect of the triceps then the lateral head must be targeted!

Medial head: Surprisingly, this is located at the back of the upper triceps; this is unusual due to the fact it would be expected to be in the middle!

Long head: Where the aim is in the name; it is the longest part of the triceps and is located running down the back of the body on the arm.

Functionally speaking, the triceps are underestimated. They are without a doubt one of the most important upper body muscles we have. From a non-gym perspective, we use them everyday in our daily activities; due to the extension at the elbow joint, any push movement we do will involve our triceps as one of the predominant muscles.

There is often a tendency for the tricep pushdown to be performed incorrectly, here is a go to guide on how to prevent this from occurring.

Hitting the pushdown correctively means more muscles are working.  As much as this hits your triceps primarily, it can target other muscles in supporting roles including the core, back and shoulders.

There are more triceps than biceps.  Want to fill out your sleeves, this is the move you need.

The term ‘tempo’ refers to how quickly or slowly you perform the concentric (the positive) and eccentric (the negative) phase of an exercise. Adjusting and manipulating tempo is an excellent way to aid progressive overload.

In short, changing up the tempo of an exercise is great for beginners, as it sets a continuously controlled rhythm throughout an exercise. It can be additionally useful for advanced trainers for adding tension and can make a weight or resistance far more difficult than it usually is. The tempo of the triceps pushdown exercise can be sectioned into 3 groups:

1. The pushing down phase or the concentric phase, applying an extension at the elbow joint.

2. The brief pause after step one is finished. This is the optimal time to ‘squeeze’ the muscle and apply tension.

3. The releasing of the bar or the eccentric phase, using a flexion at the elbow.

Whilst it’s difficult to suggest a tempo that everyone can apply, there is a general pattern that can be linked to the triceps pushdown. As a generalisation, aim to create a rather explosive and quick tempo on the pushdown of the movement (the positive), then pause for a brief second as you squeeze and contract the triceps, before slowly releasing the weight throughout the upward release of the movement (the negative).

Not Focusing On All Three Heads

Training all three parts of the triceps is absolutely pivotal to overall arm progression. Developing all three heads will give your arm a more symmetrical, aesthetic and proportional appearance. Next time you train triceps, incorporate an exercise to stress each head of the triceps, applying a variety of reps, sets, rest times and machines used.

Too Much Bicep Focus

As stated previously, the triceps makes up 2/3 of the arm – therefore it is recommended to start your arms sessions with a triceps movement or set of exercises before, or alongside hitting the biceps.

For the full benefit of the triceps pushdown exercise, proper form and technique must be applied. The elbows must be in the correct position throughout the whole movement. The moment that the elbows lose control and move out of position, the tension will be shifted from the triceps and towards the chest and shoulders. This poor form usually happens either due to genuine poor technique or trying to lift too much weight.

How to do a tricep pushdown at home

The close grip push up is a variation of the push up that focuses on hitting the triceps. The movement is shown in the video below.

Can You Handle This Full-Body Kettlebell Workout…

How To Get Stronger | 5 Steps To Hitting A Personal…