Even though the idea of a “perfect” physique definitely differs between most gym goers, very few will deny the impressiveness of a decent v-taper. A thick, wide and flaring back will give you that comic book-like body shape; but to get to this stage it’s going to take some hard work and grind. Simply resting your elbows on imaginary lats, following the “fake it until you make it principle” simply won’t cut it. Don’t leave building your back muscles to a chance, pick up the five movements listed below and say farewell to being able to scratch your back ever again. 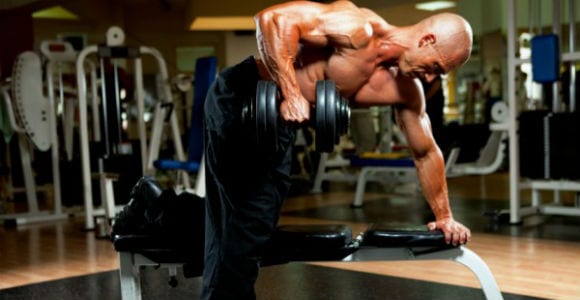 Rows, in different shapes and forms, are a staple in any back workout. Traditionally barbell rows are thought to be the best back builder movement; however these do not allow full range of motion, which is crucial for maximal muscle stimulation and growth.

First of all, using a straight bar itself stops you from fully driving your elbows back, unless using the cambered bar… which is rarely found at most commercial gyms. Secondly, when rowing with both arms at the same time, the movement of your shoulder blades tends to become restricted as the trapezius muscles prematurely bump into each other, preventing any further movement. Switching to dumbbell rows instead will eliminate these problems.

…But what about the mysterious “Dead-Stop”? Not only does the dead stop make the exercise sound more hard-core, it also makes your back scream for mercy. This variation has been popularised by a bodybuilding guru John Meadows – the idea is to put the dumbbell down for a second at the end of each rep. This will eliminate the momentum and (if done correctly) allow extra stretch. Following the dead stop, drive the dumbbell up as explosively as you can, squeezing your back for a second as you reach the top, then slowly lower the weight and “dead-stop” it again. 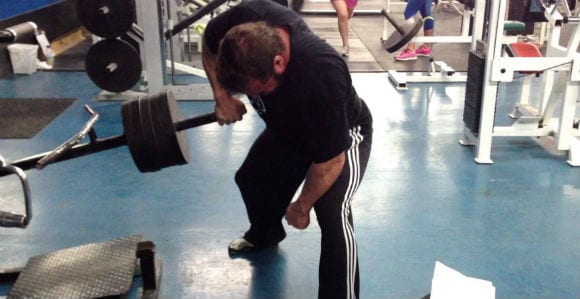 The meadow row is another row variation and another one of John Meadows’ favourites – “They see me rowin’ they hatin’”. Meadows swears by this exercise, giving it credit for his impressive back development… which as he admits, never improved following regular chins, barbell and dumbbell rows.

This movement attacks the back from a unique angle, putting a lot of emphasis (again, if performed correctly) on the lower lats, which tends to be a troublesome area for most enthusiasts of this iron sport. The key here is having the correct stance… which might take a while to get a hang off – therefore feel free to spend a couple of warm-up sets getting it right, judging how the muscle feels.

When you perform this exercise use a T-bar loaded with no bigger than 10kgs plates, this is because bigger plates will hit your chest before you will be able to drive your elbow back. Stand perpendicular to the T-bar (next to the end where the plates go), place the leg opposite to the arm you will be rowing with forward and rest your arm on top of it. The other leg goes slightly back and closer to the bar – so that the hip on this side is higher than the hip on the other side, which aids the stretch. Drive the weight up by focusing on your elbow travelling as far back as possible – do not twist your waist and keep your legs rigid. Your lats should give up before your arms; if you struggle with keeping your grip tight it may be worth considering using straps. 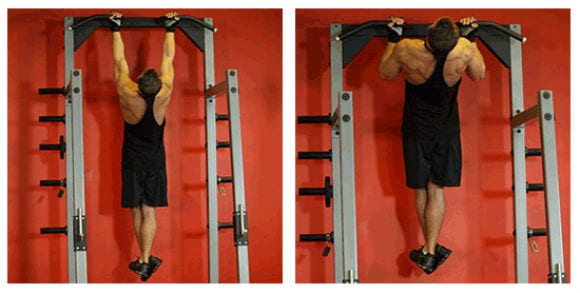 Every kid on a playground knows what chin ups are, but there is a good chance that you may have started scratching your head after reading this exercise name.

Vince Gironda was one of the most notable bodybuilding gurus of the 70s; guiding such bodybuilding icons as Larry Scott, Lou Ferrigno, Frank Zane and Arnold Schwarzenegger. His nutritional and training methods were very unconventional and by today’s standards he would probably be deemed a “bro-scientist”. Nevertheless he produced results with his inventive, often awkward exercises which gave him the nickname the “Iron Guru”.

The Iron Guru’s single best lat exercise prescription was sternum chin-ups, which allow a greater range of movement when compared to their regular counterparts.

You start off with a shoulder width, underhand grip – arms fully extended and back stretched. Following, pull yourself up while leaning your head back and arching back the spine – at the top of the movement your legs should be at 45° to the floor and your head should be parallel to the floor. Continue to pull yourself up until your sternum (lower chest) touches the bar – this is where you contract your back for a second and lower yourself down in a controlled fashion.

The only way to add additional resistance to this movement without shifting your centre of gravity and affecting your form would be a weight vest… or a generous cheat-meal.

However, if performed in a controlled manner and with perfect form this exercises will beat you down without the need of extra weight. Alternatively, you can try to mimic the described movement on a cable pull down – which may be the most beneficial for trainees who are lacking in the upper body strength department.

4.Back Extensions on a Hyperextension Bench

This exercise is arguably the best isolation movement for the spinal erector muscles that run from the bottom of the spine to the base of the neck. Even though this exercise may not contribute towards the praised v-taper they are still worth your attention – being responsible for the width of your rear and lower back development.

Back extensions can be seen as an alternative to deadlifts, which relatively pose a greater risk of injury. However, this movement has many more benefits. First of all, it will help to develop a correct posture (“neutral spine”) helping with heavy deadlifts and squats.

Furthermore, isolating the spinal erectors also helps to develop mind-muscle connection. Being able to feel the targeted muscle in a compound movement (e.g. spinal erectors in deadlift) might be difficult if supporting muscles are taking over and you cannot force an isometric contraction (i.e. squeeze the muscle at the top of the movement). Back extensions will make this much easier.

Lastly, back extension allows you to work the spinal erectors over a greater time under tension. The erector spinae composes of both slow-twitch and fast-twitch muscle fibres, which means that you need to be hitting both high and low reps when training them. Can you imagine a few slow, heavy, high-reps (+20) sets of deadlifts? Chances are that you’ll run out of oxygen before your muscle will run out of the capacity to extend your back- but this is not the case with back extensions.

This movement ideally should be performed on the upright bench rather than 45-degree bench, as the latter does not allow maximal stretch of the erector spinae. A key point is to roll the spine up and down, rather than lift your-self up with glutes and hamstrings. The movement should reassemble an abdominal crunch. Exceptionally, in this exercise, lifting the torso above parallel (hyperextending) is acceptable as in the lying position the gravity does not apply the pressure on the spinal discs. To increase the resistance you can hold a weight plate or a barbell while performing the movement.

The undisputable king of back exercises and the ultimate test of manhood (or womanhood) is the deadlift. The deadlift is an exercise which engages most of the muscles in the body… including face due to pain-induced grimace. If you ever come across an anatomical illustration showing the muscles that are involved during deadlifting, you will struggle to distinguish them from a red splatter – where most muscles will be marked red. Nevertheless, lumbar muscles, latissimus dorsi and trapezius are our focus here.

Remember that in terms of building muscle, you want to focus on engaging your back rather than lifting for the sake of moving the weight (unless you are a power-lifter). That is why you should:

-Use a shoulder-width stance (wider stance will reduce the range of motion, closer will impair the stability)

-Use a classic overhand grip rather than a reverse power grip (overhand and underhand)- which only serves as a purpose of stopping the bar from rolling, putting the supinated arm in a vulnerable position

-Use straps, to make sure that your back gives up before your grip – after all there are more effective exercises than deadlifts to target the forearms.

In terms of safety it is very important to avoid hyper-extending the back at the top of the movement as well to avoid rounding the back. By expanding your chest, contracting your abdominals and arching the low back you will create a “block” which will help to maintain a correct posture. Wearing a weight lifting belt can also provide additional support.

Back To The Gym? We’ve Got A Training Outfit For That

The 15 Best Foods For Weight Gain

Bored? Here’s 6 Things You Can Do Instead Of Looking…

How To Make The Perfect Vegan Pancake