There are substitutes for your cow’s milk and vegans can opt for their own ‘vegan’ milk. But how are they both made, and what actually goes into vegan milk if there isn’t actually cows milk present?

This is an excellent form of calcium and is rich in Vitamin D and potassium. It’s also present in a large number of everyday dairy products too, such as yoghurt and cheese. Cow’s milk is mainly made up of carbohydrates, protein and water. The carbohydrate content is mainly lactose which is sugar.

Proteins in cow’s milk can be divided into two kinds – caseins and whey proteins. Caseins are a slow-digesting, slow-release protein, and the ratio of casein to whey protein in cow’s milk is around 80:20. There’s also approximately 3.4g of protein in semi-skimmed milk per 100g. Cow’s milk contains around 1.7g of fat per 100g of semi-skimmed milk, most of which are saturated fats.

Cow’s milk, as previously mentioned is rich in calcium, which is a crucial source for healthy bones and teeth. Due to being a source of potassium, cow’s milk can also help reduce blood pressure. Cow’s milk is also a source of protein and it contains essential amino acids, which can support muscle growth. Studies have also linked the regular intake of cow’s milk to the regulation of blood sugar levels within the body. With high levels of Vitamin B and essential minerals, cow’s milk can help the stability of the body’s metabolism. You can use milk with your whey protein at night as its slow-release proteins can make your body fuelled with protein overnight.

The main reasons for avoiding cow’s milk are usually dietary requirements. Dairy-free diets would mean that cow’s milk would be free from your diet. Also, it’d be best to avoid milk while on a ‘cut’ due to the levels of carbohydrates and fat, with water being the preferred option.

Vegan’s have their beliefs as to why they won’t consume anything from animals, but with milk being such a popular everyday liquid, how can it be substituted for vegans? Vegan milk can be made from nuts, soybeans, hemp seeds, rice, or coconuts. It can also be made in a variety of different flavours too.

Almond milk is a vegan alternative and is made up of ground almonds and water. It tastes sweeter than cow’s milk, but it is low in fat and sugar and is naturally higher in vitamins and minerals. Hazelnut milk is another vegan-friendly milk, and although it’s high in fat and calories, it’s Vitamin B and E contents are high. Soya milk is a key protein source, and as a plant-based milk, it has half the fat of cow’s milk and a third of the calories per 100g.

Vegan milk is free of lactose, so it certainly of use to those who are lactose-intolerant. Most vegan milk can also be made quickly and economically at home and lots of flavours can be added to it too.

Cow’s milk can also potentially be contaminated by the antibiotics and hormones pumped into the animal’s body, however, you don’t run this risk with plant-based milk.

Although almond milk has plenty of benefits, it’s also extremely low in protein, where cow’s milk can be used as a source of this vital nutrient, this vegan-friendly alternative has a much lower protein content with just approximately 1g per 250ml cup. Other vegan-friendly kinds of milk such as coconut milk are high in saturated fats too, which isn’t ideal for lean muscle growth. Vegan-friendly milk can also prove to be more expensive than cow’s milk too. 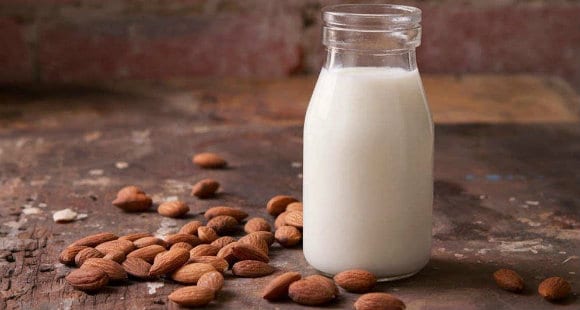 Cow’s milk is a good protein source to support your muscle growth, however, in terms of keeping clean, vegan-friendly options might prove to be a better choice, although they do tend to be lower in protein. The plant-based do tend to be higher in fibre and vitamins, yet are also a good option for those who are lactose intolerant.

How to Build Muscle and Improve Strength in Lockdown

Training In The Morning When You’re Not A…

Moderate-Vigorous Exercise Is The Best Way To…

Do Testosterone Boosters Really Work? | 5 Most…