Juice diets are seen as the “quick fix” of the dieting world. They claim to offer rapid weight loss, a detoxified body, and even improved mood in some cases. However, is it really safe to limit your intake of foods and is the weight loss really sustainable? Find out if a juice diet meets its cure-all claims, or should be poured down the sink. 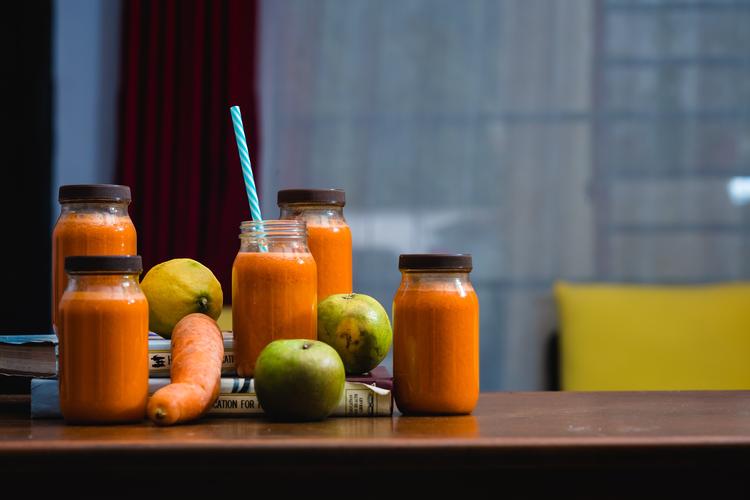 What is a juice diet?

A juice diet is a diet in which all consumed meals are in a juice form, in an attempt to consume more vitamins and minerals than you would via your normal diet. They typically last around 3-7 days.1 It’s claimed that all of these extra micronutrients can help your body ‘cleanse’ or ‘detoxify’, lose significant amounts of weight, and increase energy levels.1

For many, a juice drink can provide a quick fix and be used as a reset button to kick-start a new, healthy eating regime. Despite their recent popularity, there’s a distinct lack of scientific evidence to support such claims, and juice diets can bring a range of health risks, meaning they should be used with caution.1-4

Benefits of a juice diet

Due to the lack of long term evidence for the benefits of juicing, and the negative effects of a low protein and calorie diet, it’s not recommended that you stay on a juice diet for very long. However, done sensibly and for a short period, there may be ways in which you could benefit from incorporating some form of juicing in your diet.

There’s also data to show that a 3-day juice diet can improve the composition of your gut bacteria. Gut health is a rapidly emerging field, with plenty still to be researched, but the importance of a healthy gut has been well documented.6

A study looking into the effect of a 3-day juice diet shows that beneficial strands of gut bacteria were increased during 3 days of juicing. However, after two weeks of returning to a normal diet, gut bacteria returned to baseline.6

There’s also evidence to show that nitric oxide is increased during a juice diet. Nitric oxide is what’s produced following ingestion of dietary nitrates, which are found in foods such as beetroot. Nitric oxide has been shown to help with cardiovascular health by reducing blood pressure and improving tolerance to exercise.12

One of the main reported benefits of juice diets is the ‘cleansing’ or ‘detoxing’ effect they have on the body. However, this has been largely debunked by the experts.1

When it comes to detoxing, your body’s organs, such as the liver and kidneys, are very capable of the job, regardless of how many juice drinks you consume.1

As to which specific toxins the juice drinks get rid of, it’s somewhat unknown and they’re rarely identified by those purporting the benefits of a juice drink.1

When it comes to toxicity, the danger is always in the dosage. Consume any substance in extreme, excessive amounts and it can be dangerous. For example, even too much water can cause serious health issues.5

Another of the supposed main benefits of juice drinks is weight loss. Whilst there is evidence that juice drinks can help shift weight in the short term, the effects don’t tend to be long-lasting.6,2

The way in which a juice diet will help you lose weight is by reducing your calorie content. Some juice diets can be as low in calories as 400 a day.2 This isn’t sustainable, and once normal calorie consumption is resumed, you’ll quickly gain the weight back. Additionally, large amounts of weight loss in a short space of time increase the likelihood of losing important lean body mass.

When lean body mass is lost over a short space of time, there’s a concept called collateral fat gain.7 This is where the body fights to regain the sudden weight loss in an attempt to restore homeostasis, your body’s natural balance.

The brain communicates with the body and gut and increases hunger hormones in an attempt to raise energy intake as a way to restore lean body mass. As the body restores fat at a faster rate than lean body mass, the result is an overall increase in body fat, leaving you in a worse position than when you started the diet.7 For this reason, it’s recommended that weight loss should be gradual, over a course of weeks and months. This limits the amount of muscle loss and reduces the risk of weight being piled back on. Are juice diets safe, what are the risks?

As juices are typically made up of fruits and vegetables, juicing diets are often very low in protein.2 A reduced protein intake can lead to numerous health issues, which include nausea, headaches, dizziness and shakiness. Coincidently, these symptoms are often attributed to ‘toxins leaving the body’ by proponents of detox diets.2

Low-calorie diets have been shown to increase the amount of your body’s stress hormone, cortisol.9 An excessive amount of cortisol can cause numerous problems such as lowered immunity, gastrointestinal complications, and mood disorders.10

An example of the dangers of prolonged juicing is highlighted in a case study, where an individual stayed on a juice diet for 6 weeks. An excessive intake of oxalate, which is found in foods such as beets and parsley, ultimately led to kidney failure.2 Whilst this is an extreme example, it highlights the dangers of following such intense diet protocol.

Although a juice drink can be a great way to include plenty of helpful vitamins and minerals, making juices the sole component of your diet isn’t advised due to the negative effects of low calories and low protein intake. There are numerous health risks and juicing should not be seen as a way to ‘detoxify’, as there’s no scientific evidence to back it up.

As with most things in nutrition and health, it’s best not to take things to extremes. Although a juice diet may provide initial motivation, when looking to lose weight and keep it off, the most effective way is via a modest, sustained energy deficit (where you eat fewer calories than you burn in a day), with a diet containing adequate amounts of protein and plenty of exercise.

Enjoy this article on juice diets?

What you need to know to get lean.

8. Hector, A. and Phillips, S. (2018). Protein Recommendations for Weight Loss in Elite Athletes: A Focus on Body Composition and Performance. International Journal of Sport Nutrition and Exercise Metabolism, 28(2), pp.170-177.

How To Train Safely In Hot Weather

How To Pack The Perfect Gym Bag | 10 Gym Bag Essentials

How to do the Overhead Press the Right Way

Instagram vs. Reality — Here’s What Goes Down At A…