How Much Do You Spend Preparing for Summer?

In a UK-wide survey conducted by Myprotein, with 1,078 respondents aged from under 18 to over 60, results found that the average person spends £127 per month (£535 for an average length of summer preparation) in trying to meet their summer fitness goals. Our participants had a range of summertime goals, including losing weight, building muscle and getting abs. Our results found that people spend as much time and money preparing for their summer holiday as the holiday itself.

Is your summer body costing more than your holiday?

The average cost of preparing for summer (£535) was found to be greater than the cost of an average domestic holiday (£423) and over half the cost of taking a holiday abroad (£1,066). Of all that were surveyed, millennials (aged under 18 to 30 years old) said they spend the least on a summer holiday whilst the 51+ age group spent the most (£984 vs £1,575 respectively for a holiday abroad). Despite this, millennials will still spend a phenomenal £491 preparing for their summer body, more than they spend on a domestic holiday in the UK. 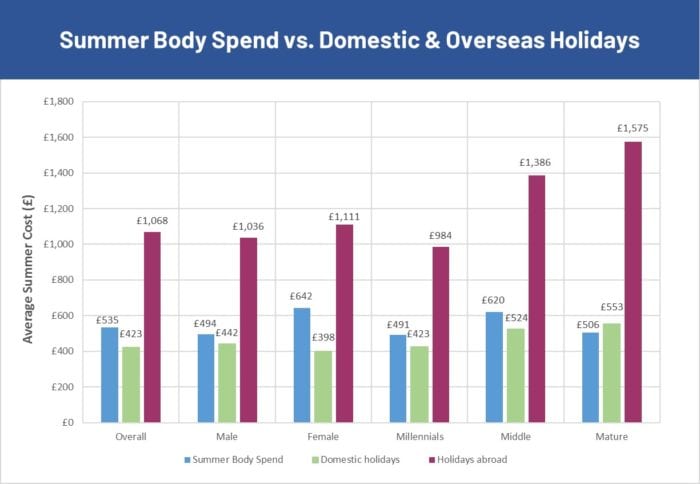 How much does it cost to prepare for a summer body goal?

Middle aged respondents (30-50 years old) splash £620 preparing for summer with their biggest spend being on supplements (£118). Millennials were found to be better summer savers compared to the other age groups surveyed, spending on average £491 a year, primarily on healthy food items. For the over 51 year olds, over a quarter (28%) of their total summer spend (£506) is dedicated to gym memberships and classes.

Where does your summer spending actually go?

Out of 8 spending categories surveyed, the area people spend the most on is bulking up their food shop with healthier items. On average, people spend £144 (£27 per month preparing) improving the contents of their kitchen cupboards. 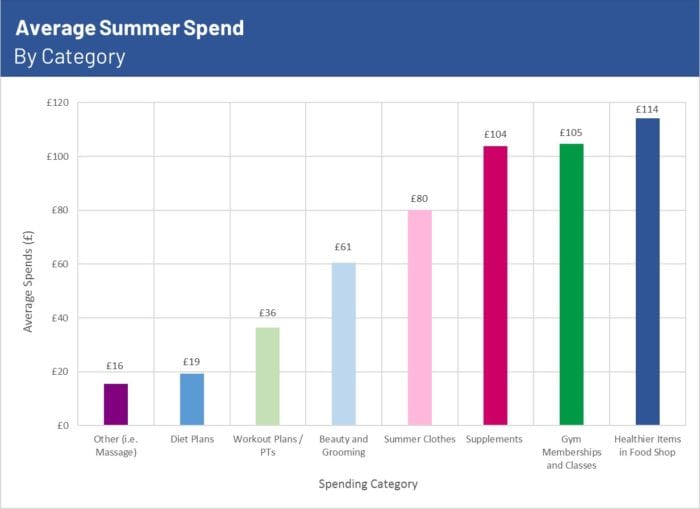 When opting for healthier food in the summer months, people prioritise eating less fat (77%), eating more protein (72%), and cutting back on sugar (66%). As well as opting for healthy meal choices, half of Brits on average have started going vegetarian or vegan for the summer in an effort to meet their desired fitness goal. This dietary change is most prominently seen amongst millennials (under 18 – 30 years old) of which 56% claim to start following a plant-based diet. The fact that only 22% of over 50 year olds opted for this dietary change suggests “going veggie” is a trend most popular amongst the younger generation.

It might seem surprising how much people spend in an attempt to achieve their desired summer look, but more and more people are prioritising health and fitness in their lives. The easier access to healthy recipes online and the growing popularity of diets such as veganism go hand in hand and partly explain why people may spend more on healthy food ingredients to help achieve their fitness goals.

How do men and women budget for their summer goals?

How do the genders stack up? Overall, women spend around £140 more than men in preparation for summer, an average investment of £610 compared to the £470 spent by men. 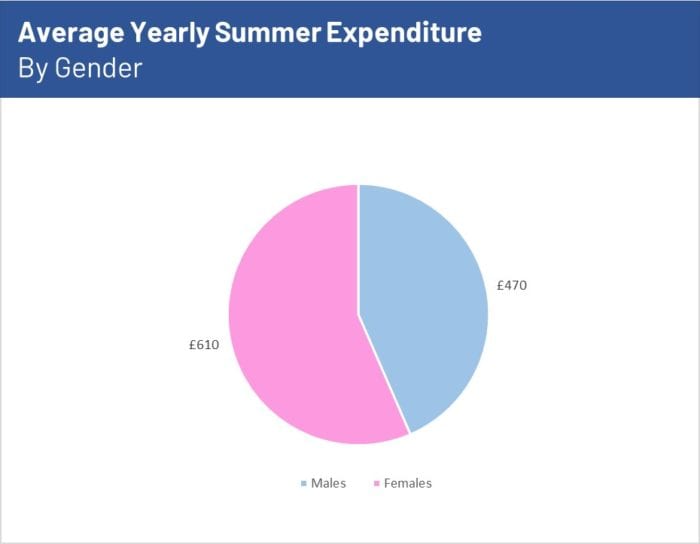 Interestingly, women appear to significantly prefer the use of workout plans and personal trainers than men, and fork out £88 more in this area, each summer. Men spend the majority of their money on supplements (e.g. protein, vitamins etc.) shelling out £30 more than women on average, making it the only spending category in which men spend more than women. 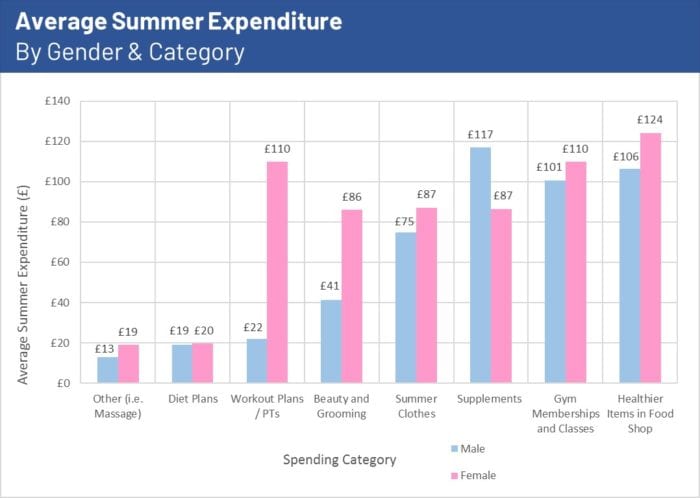 What is the most expensive summer fitness goal?

Results showed that, depending on your summer fitness goal, you could be spending more than others. The below graph shows the breakdown of fitness goals surveyed and highlights how ‘slim down/lose weight‘ is the area people tend to spend the most on at an average cost of £607 for one summer. 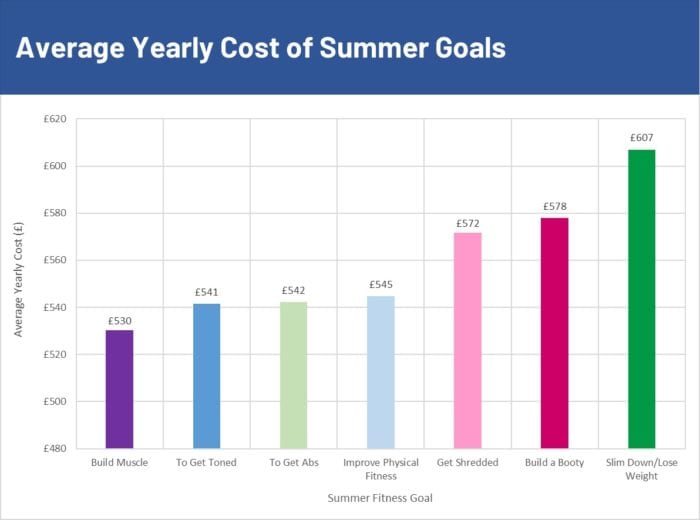 What does it really cost to successfully achieve a summer fitness goal?

When investigating those who aimed to lose weight to achieve their preferred summer look, the average person wants to lose 14 lbs, whilst those looking to gain weight aim to put on approximately 13 lbs. Although the percentage of men and women seeking to shed the pounds was relatively even (only a 14% difference), men were found to be 70% more likely to want to gain weight and muscle than women. This is supported by the fact that men spend approximately £30 more, on average, on supplements such as protein than women whilst women tend to spend £18 more on healthier food items.

As well as spending money, Brits also spend a large amount of their time trying to achieve their fitness goals. In order to slim down for summer, the average person will spend 10+ hours training each week over 4 months.

Do you need to spend more to be successful? Respondents who said they had worked for a summer goal before and were successful were found to spend £72 more on average than those who were unsuccessful, suggesting you need to fork out the cash to rake in the gains.

When should you start preparing for summer and why?

In preparation for summer, Brits spend an average of 4.21 months trying to meet their fitness goals, however women will prepare for approximately one month longer than their male counterparts (4.5 months vs. 3.5 months respectively). On average, respondents said they spend 6.5 hours a week training in the run up for summer yet 21% said they will spend over 10 hours each week working out to achieve their summer fitness goal.

Based on these preparation habits, the average cost of working towards a summer fitness goal would hypothetically be a whopping £33,705 in a lifetime*!

When it comes to why we try to achieve a summer fitness goal, it seems that Brits are mostly concerned with how they look. The majority of respondents said their main incentive to prepare for their summer fitness goal was ‘to show off my hard work’ (41%). While the majority of age groups agreed with the national average, almost half of millennials (43%) admitted that they only try to achieve their summer goals ‘to look good in pictures’, emphasising the influence of social media and the popularity of Instagram in people’s lifestyle.

Instagram has contributed a massive amount to the fitness sector as people, particularly millennials, find inspiration and advice on how to improve their overall fitness and desired aesthetic. People are willing to spend more on workout plans and supplements because they see the positive results that others share on social media and this motivates them to achieve their own personal goals. 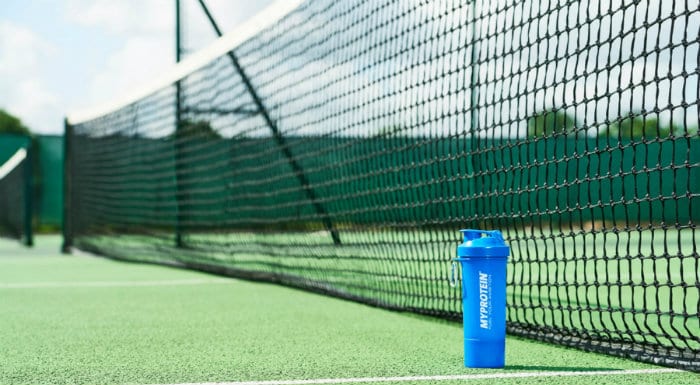 The total amount that people spend trying to achieve their summer fitness goals might seem high, especially when compared to the cost of an actual holiday, but we’re prioritising their health more than ever. Regardless of goal, be it to lose weight or hone some abs, Brits spend a significant amount of money to achieve their desired look or fitness level. Out of all spending categories, healthy food was the biggest wallet-drainer and millennials in particular are the most eager when it comes to changing-up their nutrition with 56% adopting a plant-based diet in summer.

Whilst the average person in the nation spends money to be able to show off their hard work, millennials admit that one of their primary reasons to change up their routine is simply to ensure they look good in pictures. Ultimately, if you want to be successful in achieving your summer fitness goal, you can expect to start preparing about 4 months in advance and be willing to part with those pounds!

*Lifetime costs based on an average summer preparation time of 4.21 months and the average adult life expectancy (Office for National Statistics).

Can You Build Muscle Fast? | This Is How Long It…

Can You Still Build Muscle With Just Bodyweight Training?