The tricep muscles include the lateral, long and medial heads of the Triceps Brachii. Again just like the biceps, certain portions of the triceps are more and less active in different positions.

For example: the long head of the triceps work hardest during movements where the arms are overhead or the elbows are higher than the level of the shoulders. You therefore have to train your arms from every angle, in a number of ways in order to shock them in to some growth.

Here are six highly effective exercises that will help you do just that.

Some, if not most, would have heard of the 21’s method for performing biceps curls. You perform 7 reps at the bottom range of a curl, 7 at the top, and then 7 full range of motion reps. It’s pretty exhausting!

However, according to the laws of muscle mechanics, this exercise is performed in completely the wrong order; surely it would make sense to perform the exercise in the hardest range of motion first before moving on to the easier angles.

This way it becomes a little like a drop-set, as the muscles become pre-fatigued from the first movement you are making them do that little extra to grind out some more reps, and cause greater tissue breakdown and anabolic response. This is why we perform them in the following way, and with an extra little twist:

1) Perform 7 partial reps in the bottom half of the movement.

3) Perform a 7-second pause (isometric hold) in the mid-range position.

4) Perform 7 partial reps at the top half of the movement to finish.

The laws of biomechanics also dictate that our biceps are strongest when the elbows are flexed at 90 degrees, where their length-tension relationship is greatest. That’s why we perform an isometric hold in this mid-range position for 7 seconds. Plus, using isometrics are a fantastic way to increase the muscles time under tension, creating more blood occlusion, a bigger pump and bigger hypertrophic response.

? Pick a weight that will allow you to complete around 10 repetitions, max, during a full range of motion biceps curl.

? Perform each repetition in a controlled way, about 1 second on the way up and 2 seconds on the way down.

? 28’s should be a grind to complete and you should be struggling to do the last 7 reps, but focus on squeezing your biceps as hard as you can each rep, both on the way up and down.

? Focus on quality; try to resist swinging until you absolutely have to!

The Tate Press is an advanced triceps exercise that helps to target the medial head of the triceps. The great thing about the Tate Press is that it’s almost impossible to cheat whilst doing it.

Unlike, for example, when you do exercises such as triceps push-downs, you can ‘muscle’ the weight down with other areas such as your chest or shoulders; the Tate Press really isolates the triceps, as very little movement can go on anywhere else.

This is why it’s great as an assistance exercise for those looking to improve weaknesses in the Bench Press exercise for example, or when looking to really isolate the triceps!

? To make this exercise the most effective it can be you need to choose a weight that will allow you to get around 12-20 repetitions per set.

? Maintain a nice tight position on the bench with the shoulders back and the elbows flared out towards the side, then focus on most of the movement coming from the elbows.

? You can also do this on an incline bench which would help isolate the medial head of the triceps a little more.

? If you hold the dumbbells so your little finger is all the way touching one side, so your hand is off-set from the middle of the dumbbell; this will help to maintain the tension in the triceps in the top position of the exercise.

This is one of the best exercises out there to develop overall arm thickness, because it thoroughly stresses all of the elbow flexors.

During the concentric lifting phase of this exercise you are performing what can be considered a basic biceps curl, whilst on the way down you are performing it with a reverse grip. The reason this exercise is so effective is because you will undoubtedly be able to lift more weight during a traditional curl than in a reverse curl. Hence, if you select a weight that is based on your traditional curling strength; the reverse curl will be overloaded significantly during the eccentric portion of the exercise.

Due to the mechanics of each part of the lift you should be able to lift a load that is challenging on both the concentric and eccentric parts of the lift. From much research we know that in general people are around 50% stronger during the eccentric phase of an exercise, and by capitalising on this using a greater eccentric load a big anabolic response can be triggered.

The twist at the top of the exercise will also help with forearm muscle recruitment, making this a great overall arm builder!

? This exercise can feel a little weird at first, but after a few workouts you will soon get used to it, and sure to be one of your favourite go-to upper arm builders.

? Select a weight based on what you can lift on the positive concentric portion of the lift, slowly pronate (rotate inwards) your wrists at the top of the movement, and then lower slowly for around 4 seconds under control.

? Multiple sets of 12-15 repetitions work the best for this exercise.

This exercise is essentially a combination between a lying triceps extension and a dumbbell pullover, which, as a result, allows you to use more weight than you normally could during a traditional triceps extension.

As the elbows are placed behind the shoulders, the long head of the triceps are also under a large amount of passive tension, or a loaded stretch. The increased weight coupled with the increased tension on the triceps, make this a great triceps builder, and definitely one that you feel the day after.

? Perform the exercise for 10-20 reps as this exercise, when loaded excessively, can place a lot of stress on the elbows.

? Do not explosively lock-out your elbows, keep them very slightly bent as you extend your elbow, making sure tension on the triceps is maintained.

? Don’t be too tempted to go heavy on this exercise because excessive weight during this exercise can put unwanted stress on the elbows.

? This exercise works best towards the end of your workout for multiple sets of 12-20 reps, so keep it in your toolbox for when you want a great finisher to your training session.

It’s the large golf-ball shape muscle that between the biceps and triceps brachii, so a well-developed brachialis muscle can help the overall appearance of the biceps and triceps muscles seem larger. Unlike the biceps brachii, which is involved in both flexing the elbow and rotating the forearm; the brachialis has the sole purpose of flexing the elbow. Although it is therefore involved in a lot of elbow flexion and curl-type exercises it is often the weak link in arm development.

The 1-Arm Leaning Rope Curl is just such an exercise, as the neutral (hammer) grip position on the rope helps to isolate the brachialis, and the bent forward position works to maintain tension in the upper arm throughout the entire movement. Some research has also shown that performing explosive concentric repetitions, and slower eccentric reps targets the brachialis muscle even more.

? Bend your torso slightly forward to help keep tension through the full range of motion.

? Feet can be parallel or one foot slightly in front of the other.

? Perform the concentric portion of the exercise fast, squeeze at the top, and then lower under control for 2-4 seconds.

? If you don’t have a rope available for this exercise, then you can still perform it by just holding on to the end of a cable without any attachments.

? The brachialis muscle responds best to heavy weight and explosive concentric reps, so sets of 6-8 reps would work best for this exercise.

The Band Triceps Push-Down exercise makes this list purely because of its cruelness factor. It’s pretty nasty, especially when performed how I would suggest you perform it at the end of a session!

The technique is pretty simple, and very similar to a Rope Triceps Push-Down. You should extend your elbows, part the band at the bottom a little and squeeze your triceps as hard as you can. The increased tension on the band in the end position means that the tension is the greatest when you are squeezing your triceps the hardest. 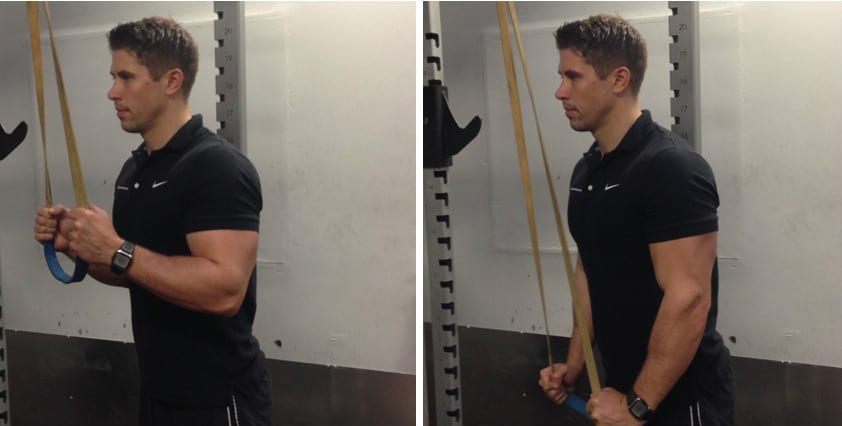 The method that we use with this exercise however makes it the great exercise that it is.

Select a strength band that will allow you to be able to do approximately 20 reps. You are going to perform 100 reps, in as little time as possible, and with as few breaks as you can in between. It is up to you how you do it as long as you do it. This method is great to increase work capacity of the triceps by training the lactate-capacity energy system, improving vascularity and muscle pump, and triceps size.

This will undoubtedly be one of the hardest few minutes of your workout, as the burning sensation is one of the worst you’ll ever experience, but well worth it.

? Select a resistance band that will allow you to perform 20 repetitions with good technique.

? Each repetition should be controlled, and focus on the squeeze at the end of each one.

? Pulling the band apart a little and turning your elbows out as you squeeze will help with triceps muscle recruitment.

? Perform 100 reps in as few sets as you can, but still focusing on quality of each rep.

? As you progress with this exercise either use a heavier band, or try to complete the 100 reps in fewer sets.

To build an impressive set of arms you must focus in hitting all the muscles in different ways, using different angles to target each area and varying repetition speeds to capitalise each of the qualities of the muscle you are trying to target.

When it comes to arm development some people are luck and can experience growth from as little as doing a few sets of chin-ups, however, for most, isolated arm training is essential.

The exercises shown above will help you challenge yourself in the use of some new exercises, and help add some upper arm thickness that will give some sleeve popping results!

Vicky Fleetwood Challenges You To A Six-Part Finisher

What Is Guarana Extract? | Benefits of Drinks &…