In a world where it’s far easier to reach for a sugar-heavy snack instead of wholesome food, it can be difficult to make clean gains without a little bit of help. In fact, you might turn to gainer shakes to rack up your calories in a convenient way. The problem is that some gainer shakes are filled to the brim with sugar and empty calories, which will see you gaining as much fat as muscle.

If this sounds familiar, then you need the scoop on the new and improved THE Gainer. We’re constantly looking for ways to improve our products to keep you at peak performance. So, we’ve re-formulated more than just the flavours to give you a delicious shake for the leanest gains you can get. 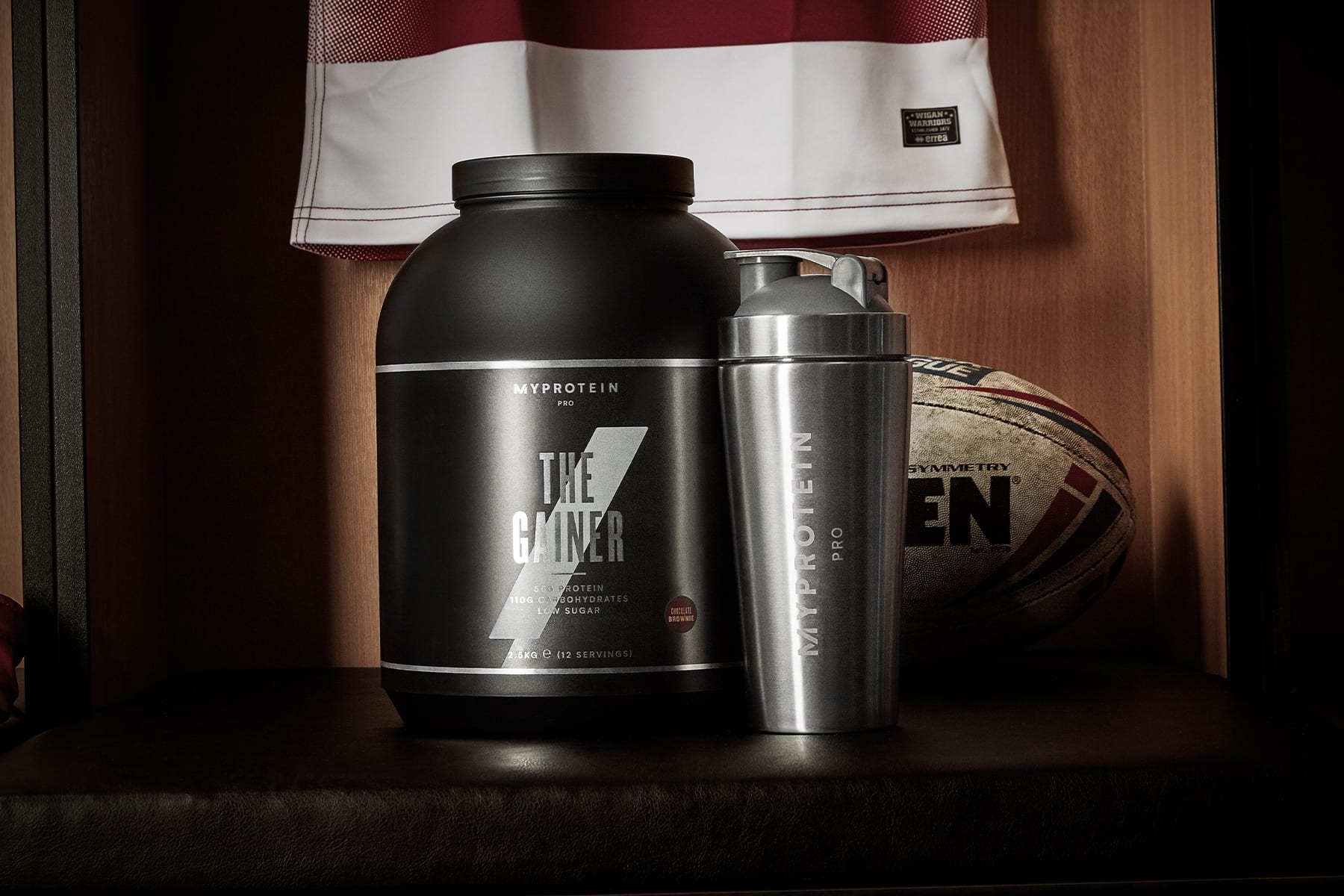 Texture and flavour is something that’s very important to something that you’re drinking day in and day out. That’s why we’ve worked incredibly hard to make this our most delicious gainer shake to date.

The old chocolate and strawberry flavours were lacking a little something, so we’ve switched up the shakes to create Chocolate Brownie and Strawberry Milkshake flavours that you’ll be desperate to devour.

Mygainer was a little on the thick side to make it a convenient shake and enjoyable texture, so there’s been some important alterations here too. The new smooth texture and tastiness mean you’ll never struggle to sip away at this shake. While Mygainer had pretty decent macros to make clean-cut gains, we’ve taken this one step further in THE Gainer. Both flavours have an exact 2:1 ratio of carbohydrates (110g) to protein (55g), so that your body is able to make the most of post-workout recovery time.1

After your workout, carbohydrates are used to replace used up glycogen stores as well as to help protein be taken up by the muscles, so this ratio means that your body can make the most of this to build muscle.2

THE Gainer also contains 10g of healthy fats, which are needed for tasks such as providing energy and supporting cell growth.3 These fats come from medium chain triglycerides and flaxseed, making it a far more nutritionally balanced shake than it was previously.

THE Gainer still contains a premium blend of fast- and slow-release carbohydrates to provide you with immediate as well as longer lasting energy. Carb10™ and Highly Branched Cyclic Dextrin (HBCD) provide this perfect balance of quick energy and slow, sustained energy.

Carb10™ has a low osmolality, so that it can pass quickly through the stomach, while its low glycaemic index means it won’t spike blood sugar or insulin levels and will provide a slow and sustained release of energy to the muscles.

Research has shown minimal insulin and blood glucose response to Carb10™ after ingesting over a period of 1-2 hours, compared to maltodextrin, which shows a significant spike and crash for both insulin and blood sugar levels.4

HBCD completes the carbohydrate balance by acting as a quick release of energy. However, it’s quite different to other fast-acting carbohydrates that are often found in gainer shakes. It has a low osmolality, so it spends less time in the stomach and is absorbed by the large intestine to be sent to your muscles quicker.

It’s also unique in the way that it’s gradually degraded and absorbed into the bloodstream, ensuring blood sugar levels remain constant, once again helping to avoid that blood sugar crash.

Unlike Mygainer, it also contains oat flour and buckwheat flour to make up the rest of the carbohydrate mix. They both have a low glycaemic index and release energy slowly. Buckwheat is also a nutrition-rich complex carbohydrate that’s packed with minerals and antioxidants as well as fibre, to help with digestion.

THE Gainer has been made even lower in sugar than Mygainer, so you can be sure that you’re getting only goodness from every calorie, which will improve body composition as you make muscle.5

Quite often, the protein content of a gainer shake is made up of mainly whey protein concentrate and milk proteins which have a much lower protein and higher fat content than other supplements.

We like to ensure that you can make maximum gains from every shake, so fast- and slow-digesting proteins are included in each THE Gainer to ensure immediate fuel for protein synthesis, that continues over a number of hours.

The protein blend in THE Gainer is relatively similar to that of Mygainer as it contains Whey Protein Isolate and Whey Phospholipid Protein Concentrate. Protein Isolate contains a higher protein content of about 90% and is believed to have less fat, cholesterol, carbohydrates and calories than other proteins. This is good news for your macros.

Unlike Mygainer, THE Gainer contains micellar casein, which is digested more slowly than whey for that slow release of protein to the muscles. It’s also an excellent source of BCAAs and glutamine for ultimate muscle-building nutrition.

On the other end of the spectrum, the Hydrolysed Whey in THE Gainer is the fastest absorbing Whey Protein Isolate there is. The large protein chains are broken down into small chain peptides for rapid digestion which means quickly transporting amino acids to the muscles for building mass.

Put simply, THE Gainer will quickly saturate your muscles with protein that will then last for a good while – this is definitely a cutting edge protein blend for no-fat muscle mass.

Prepare to have your macros met and your physical goals smashed with THE Gainer. Providing you with the perfect balance of premium protein, carbs and fat, you’ll be reaping results in no time.

3 Dutchen, S. (2010). What Do Fats Do in the Body? National Institute of General Medical Sciences.

Diet Hunger? 5 Ways To Prevent Feeling Hungry All The Time

Fall Asleep Faster In Hot Weather With These 10 Tips

How This Wellness Coach Used Yoga To Deal With Grief…