The 2019 Cricket World Cup which commenced on May 30th is set to be a particularly exciting competition. Newcomers Afghanistan will take on the world cup for the first time this year, MS Dhoni will be making possibly his last World Cup appearance, and Australia’s Steve Smith & David Warner have their big return to ODI after their suspension from international and domestic cricket in Australia in 2018.

We took a closer look at the squads for this year’s world cup to find out which teams and players are the fastest batsmen, tallest player, and highest scorers. 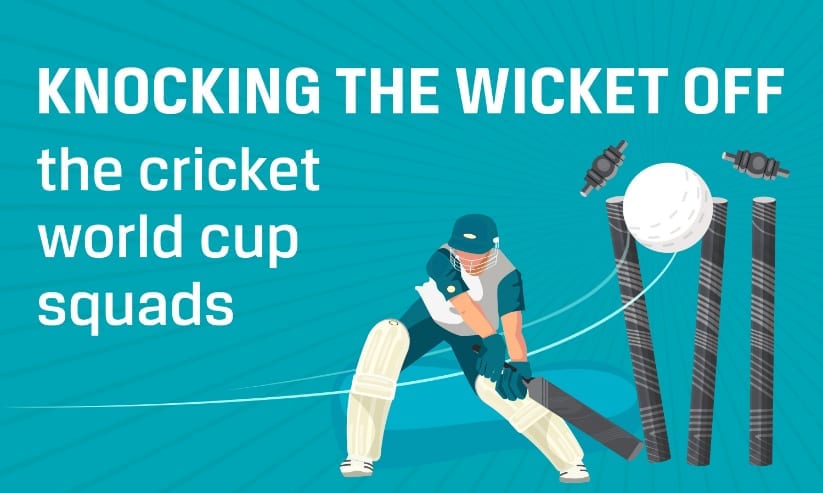 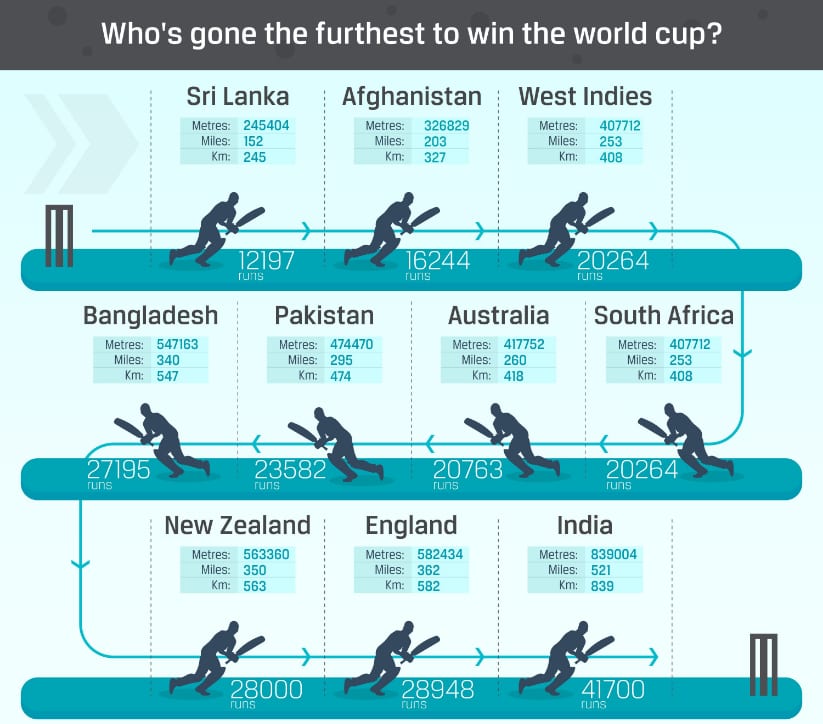 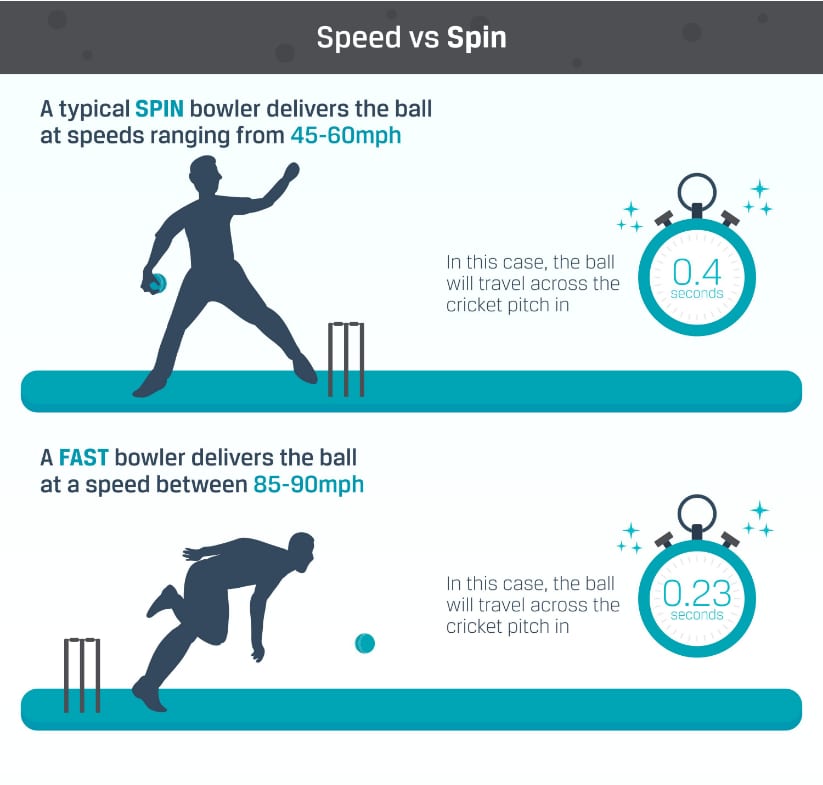 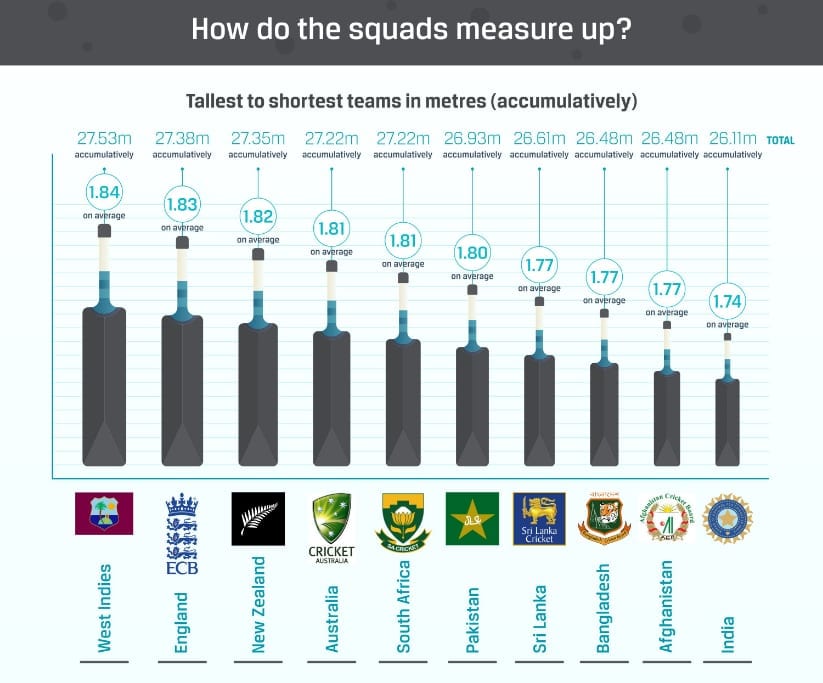 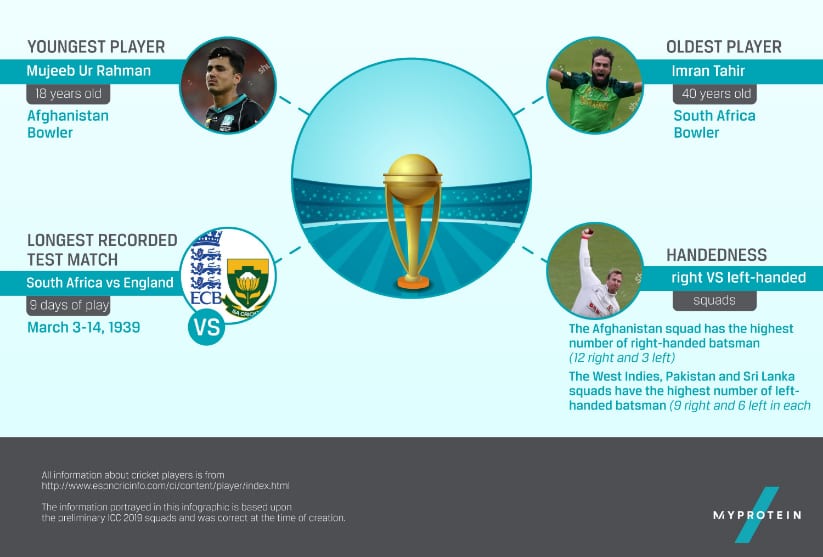 Who’s Gone the Furthest to Win the World Cup?

We looked at the number of batting runs (including boundaries) each player has gained in ODI cricket up until this year’s world cup to see which team has covered the most distance on the cricket pitch.

Cumulatively, all players in the 2019 squads have covered 4,812km in batting runs. That’s the same as running 185 marathons, equivalent to a 10th of the Earth’s circumference, and is further than driving from Melbourne to Darwin (3,741km).

Out of all the teams competing this year, India is the team that has travelled the furthest in batting runs (including boundaries), covering a total of 839km.

It may come as no surprise that the player with the most batting runs is India’s captain, Virat Kholi. To date, Kholi has gained 10,843 batting runs in ODI (including boundaries) which equates to 218km or 136 miles. That’s further than the length from Edgbaston to Lords (116 miles)!

If Kholi’s batting run speed is 9mph, then he has spent 15 hours consecutively running as a batsman in ODI. In this time, Kholi will have burned 15,309 calories – that’s equivalent to 6 days’ worth of food based on the daily recommended amount for men as 2,500kcal. 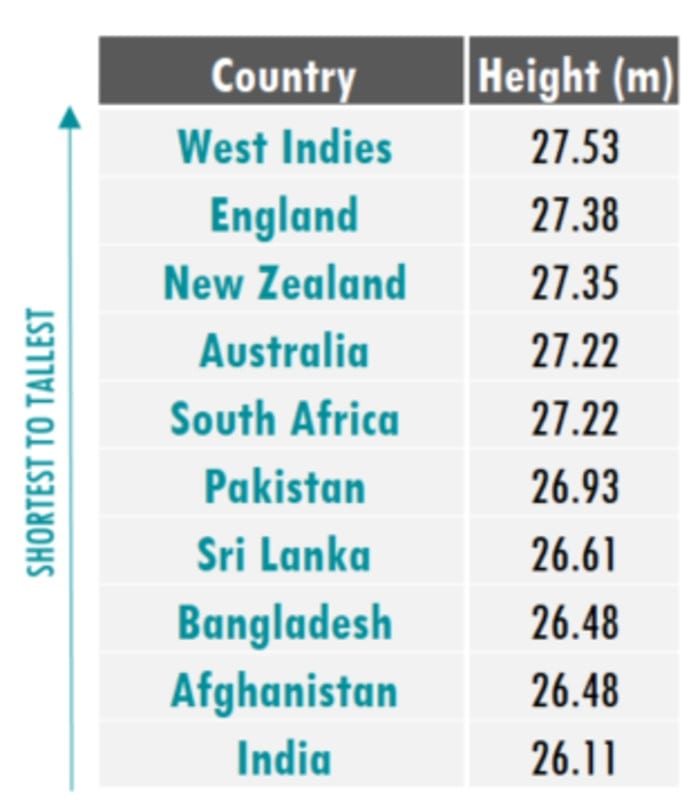 We know how far each team has travelled in batting runs in ODI, but how fast do they bowl?

A typical spin bowler delivers the ball at speeds ranging from 45-60mph. In this case, the ball will travel across the cricket pitch in 0.4 seconds.

However, a typical fast bowler, such as England’s Liam Plunkett, delivers the ball at a speed between 85-90mph, meaning the ball will travel across the cricket pitch in 0.23 seconds. That’s faster than the world’s fastest land animal, the cheetah, which has the highest recorded speed of 68-75mph.

How Do the Squads Measure Up?

The West Indies are the tallest team in this years’ World Cup, with an average player height of 1.84m and an accumulative squad height of 27.53m – that’s as tall as 10 telephone boxes stacked on top of one another!

While India has the highest number of batting runs out of all the teams, they are the shortest team competing this year with an average height of 1.74m and an accumulative height of 26.11m – that’s more than a metre shorter than the West Indies.

However, contrary to the belief that longer legs will carry you further, the West Indies height advantage does not mean they are the highest scoring team in the World Cup. Although India is the shortest team competing in this years’ World Cup they have the highest number of batting runs, proving that speed is more significant than height when it comes to succeeding in ODI cricket. 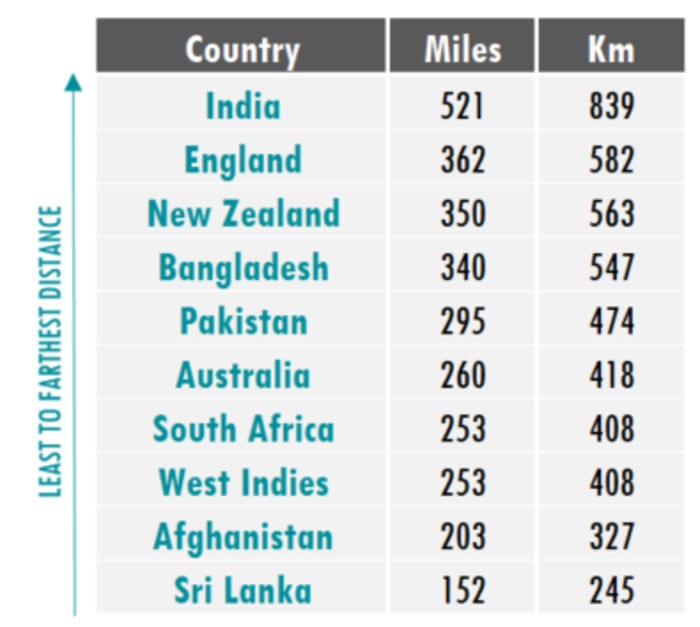 This years’ tallest player out of all the teams is West Indie’s bowling all-rounder, Jason Holder, standing at a whopping 2.01m! On the other side, the shortest player in this year’s World Cup is Bangladesh’s wicketkeeper Mushifiqur Rahim who stands at 1.60m tall.

Height isn’t the only major discrepancy in this years’ World Cup squads – the age of the players also varies greatly. The youngest player in this year’s World Cup is Afghanistan bowler Mujeed Ur Rahman who enters his first World Cup at only 18 years old. On the other hand, this year’s oldest player is South African bowler Imran Tahir, who returns to ODI at 40 years old.

Speed is more important than height when it comes to gaining batting runs in ODI as the shortest team this year, India, are the ones with the highest number of batting runs (including boundaries).

Wicketkeepers and batsman must have incredibly fast reflexes as the cricket ball will travel across the pitch in just 0.4 seconds from a spin bowler and 0.23 seconds from a fast bowler. Whichever team you are supporting this year, it’s certainly set out to be an interesting world cup – but who will win?

Victoria has a master’s degree in English Literature. She loves doing unconventional workouts like pole fit, which she’s done for the past four years. She’s also a passionate foodie, so in her spare time, you’ll find her trying out the newest restaurants in her home town.

6 Benefits Of Turmeric | What Is It? How Much To Take?