The Zone » Training » How Much Time do Brits Spend on Health & Fitness? | UK Survey Results

With the start of New Year comes new resolutions and goals with people reevaluating how to best spend their time. Perhaps the most popular area of focus during these early months is in our health – from nutrition and diet, to training and exercise. People may find themselves questioning whether they dedicate enough time to their own well-being.

How much time do you spend on your health and fitness? In a recent survey, we asked 2800 respondents from across the UK and Ireland aged 18 to 65, to share how much time they were willing to spend when it came to their own lifestyle. 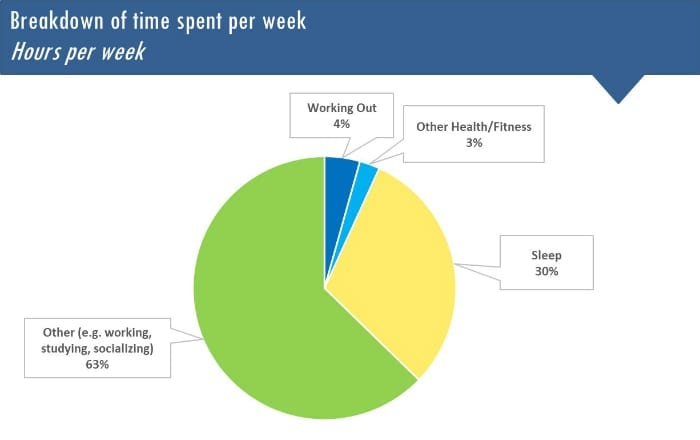 Figure. 1. The average amount of time Brits spend per week on sleep, working out, and other health and fitness related activities (e.g. meal prep, warm-up/cool-downs etc.).

So, which age group sleeps the most? Do men go to as many gym classes as women? Who works out for longer?

Our results give an interesting snapshot into how the nation choose to spend their time and looks at how behaviour differs across gender, age, and region.

According to the Office of National Statistics, people spend around six hours per week socialising (ONS, 2017). Our results suggest that people spend nearly double that time on their own health and well-being.

In an average week, the nation was found to spend 11.1 hours on their health and fitness regime which includes exercise time, warm-up/cool-down time, healthy meal prepping, etc. That’s equivalent to 24 whole days a year spent focusing on a health routine.

Within the UK and Ireland, most regions agree on the average amount of time dedicated to their well-being. However, over a quarter of people from North West England said they spend over 16 hours a week focusing on their health and fitness (26.6%).

In addition, 11.6% of people from East England spend fewer than 3 hours a week on their health and fitness.

Of all age groups, 18-24 year olds spend the longest time on their fitness regime at 12 hours per week – an extra hour than the rest of the population (Figure 2). 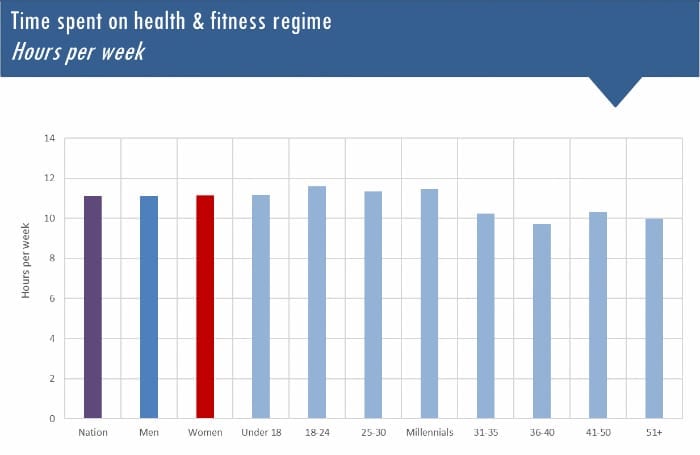 Interestingly, the results show a dip in time spent on health and fitness around the ages of 36 to 40 years old – a trend also seen in the results of our United States survey (figure 3). This suggests that adults in this stage of their life spend less time on their health and fitness and instead may be more likely to dedicate time to family and their career. 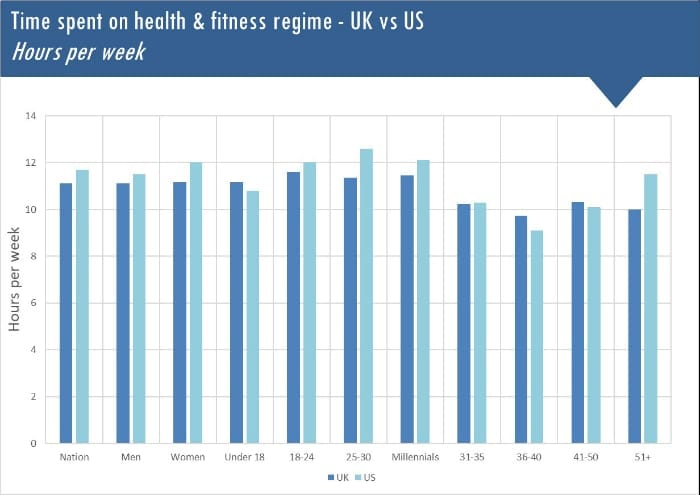 Figure 3: Comparison between UK and US of the number of hours spent on health and fitness each week (warm ups, exercise, meal prep, etc.) across gender and different age cohorts.

Results found that the average British citizen spends 7 hours per week in the gym or working out. When it comes to gender, however, men workout 1 hour more than women on average each week (7 hours vs. 6 hours).

When looking at the number of exercise sessions, 53% of men said they work out between 5-6 times a week compared to only 49% of women.

Scottish respondents were also found to be the most likely to gym 2 or fewer times a week, with 5.9% not working out longer than 2 times per week compared to the national average of 2.6%. Overall however, half of Scots (51.6%) say they work out an average of 5-6 times a week.

Overall, both the cities of Edinburgh and Dublin had the most avid gym goers, both with 67% of respondents exercising 5 or more times each week.

In the New Year, people may be tempted to buy a gym membership in the hope it commits them to spending more time on their health and fitness, but do people invest as much time as they do money?

Our results found that the national average number of times people go to the gym is 5 times per week which is equivalent to using a gym membership 240 times a year!

Out of those respondents who said they pay for a gym membership, 6.1% said they only use it 2 or fewer times a week. Based off our results, the average amount the nation spend on their gym membership is £28 per month. This means that if you only go to the gym once a week, you are only getting 4 days’ worth from your membership, meaning ~£24 is wasted on days not going to the gym. In other words, your workout will cost you £7 every time!

Thankfully, over half of Brits (55.1%) in our survey said they use their gym membership at least 5 times a week, meaning they can keep the cost of their average workout down and really get their moneys’ worth (Figure 4). 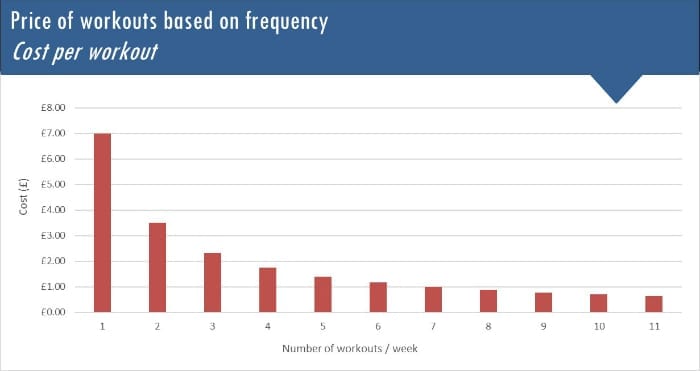 Figure 4: The average cost per workout depending on number of times using a gym membership.

In the West Midlands, 11% use their gym membership 1-2 times a week compared to only 3% of those in North East England.

Residents from the Midlands are the least likely to gym over 7 times a week; the East and West Midlands were the two lowest regions when it came to working out this frequently. Only 4.6% of people living the East Midlands and 3.5% of West Midlands said they were willing to use their gym membership once a day.

The Welsh however were more likely to work out regularly, with 12.5% of respondents from Cardiff and Swansea working out at least 7 times a week.

For more information on the cost of health and fitness, see our previous research piece here.

~ Men more likely to use benches whilst women use the treadmill ~

As well as the overall time dedicated to health and fitness, respondents from the UK shared their top 5 essential features of the gym ranging from strength and conditioning weights (barbells, weight machines, etc.) to cardio facilities (treadmill, gym classes, pool, etc.), and even additional features (sauna, sunbeds, etc.).

Out of the 33 different pieces of gym equipment and facilities, the top 5 most valued were dumbbells, barbells, squat rack/power rack, weight machines, and Flat/incline/decline benches. In fact, 83% of the total number of respondents voted for dumbbells as one of their top 5 most used pieces of equipment. 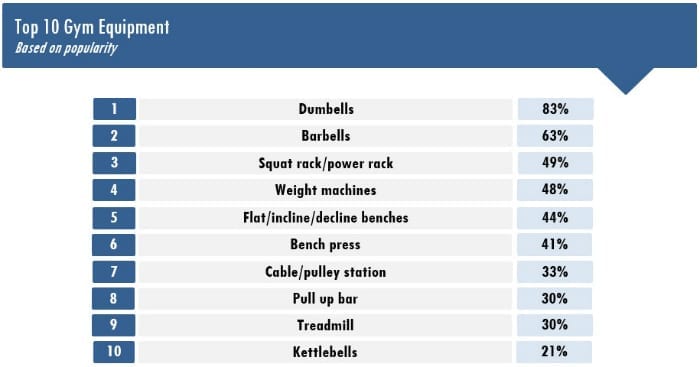 Results for men found that…

Results for women found that…

~ Over a quarter of millennials sleep over 9 hours a night ~

Resting is as equally important as keeping active when it comes to a healthy lifestyle, but what are Brits like when it comes to getting the recommended 7-9 hours of sleep each night (National Sleep Foundation)?

On average, respondents were just in the recommended value, sleeping 7 hours each night.

Looking at those that like their beauty sleep, less than 1% (0.6%) of those aged 36-40 admitted to sleeping more than 9 hours sleep compared to over a quarter of millennials (25.4%).

The Irish are most likely to sleep longer, with 14% sleeping 9 or more hours a night, compared to only 6.1% of the nation who sleep this long. In Wales, almost all (99%) of the respondents sleep under 9 hours a night.

East England are the best at avoiding sleep deprivation; zero respondents said they sleep fewer than 5 hours a night. In the West Midlands, 34% of people sleep between 5 and 6 hours a night.

Myprotein Nutritionist, Jenny Blow, agrees with the importance of getting your daily protein intake, saying:

She goes on to say…

Protein is an important part of any balanced diet but is particularly popular amongst gym-goers as it is essential for building muscle.

Respondents shared how much protein they believed they consumed each day and the average amount for the nation was found to be approximately 91g per day.

When asked how often they post a gym or fitness-related image on social media, 59% of Brits said they post less than once a week or not at all, meaning 41% would post at least once a week or more. Nearly a quarter of the nation (24%) said would most likely post a fitness pic 1-2 times a week.

Women are more likely to post a gym/fitness image on social media each week with over half of women (54%) saying they do this, compared to only 33% of men, 20% less than women.

Interestingly, only 3% of women said that ‘taking selfies’ in the gym was one of their worst gym habits, despite 54% saying they post an image each week. This suggests that most people do not consider taking a “gym selfie” to be a negative thing, or that if they do then they don’t like to admit it!

We found that 41% of people post a gym/fitness related image each week but only 1% consider taking selfies in the gym to be one of their worst gym etiquette breaks.

The younger you are, the more likely you are to post a gym/fitness image on social media. On average, 43% of millennials said they do this compared to 36% of 31-40 year olds and only 26% of those aged 41+. 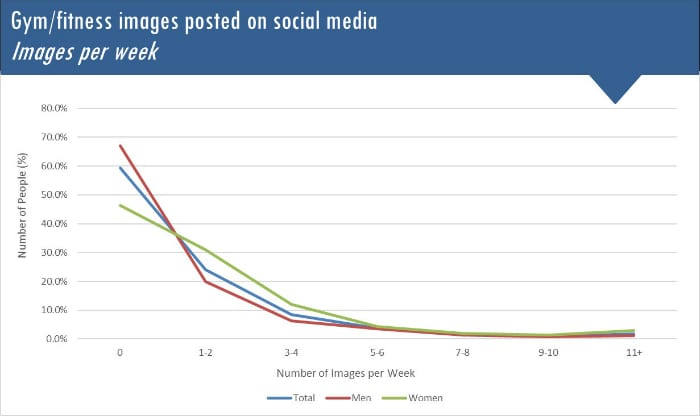 If you are looking to improve your health and fitness regime this year, there are some key things to keep in mind. Based on our survey, aim to go to use your gym membership around 5 times per week to really get your moneys worth and to get into a routine. Remember to get between 7 and 9 hours sleep each night to allow your body to rest properly. Ensure you are consuming enough protein in your diet, especially if you are training regularly, and you can even try meal prepping to keep on top of your nutrition. If you need some inspiration we have many healthy and easy recipes to suit all varieties of diet.

These results support the growing trends seen in health and well-being lifestyles, which is estimated to be worth £5 billion by The State of the UK Fitness Industry Report 2018. This growing popularity in active lifestyles can be seen in the increase of gym memberships and trends fitness-related imagery on social media. Ultimately, this could help to encourage more Brits to lead a healthier and happier lifestyle.

Limited-Edition Clothing You Won’t Want To…

Gym Rest Days | Do They Benefit Me?

Top Spices You Should Include In Your Meal Prep