Gyms all over the world have began to realise the benefits of suspension training and have likely invested in a TRX system for the gym floor. Whilst some gyms require a specific induction to be completed before using the TRX, others allow members to use the equipment freely.

I appreciate however, that taking the decision to use a TRX for the first time can be a daunting one… Well it needn’t be.

The whole premise of TRX is that any given movement can be performed at various levels of intensity. There are, of course movements that are more appropriate for beginners.

What are TRX workouts?

The idea behind TRX is that your body provides the resistance and the TRX provides the leverage: leverage principles are already a huge part of resistance training so combining bodyweight and leverage serves to provide the benefits of both training methods.

Arguably, its biggest advantage is that it can be used in an extremely low impact manner which safeguards connective tissues and joints, ideal for those with joint injuries or those undertaking rehabilitation. However, to limit its use to just these movements would be a massive disservice.

Pretty much any movement you can perform on a machine or with free weights can be replicated on the TRX and in doing so add variety to your fitness regime. I believe this is where the most benefit is gained from its use – when used alongside other training methods.

Give TRX a try!

Next time you go to the gym, ask one of the instructors if a specific induction is needed – this allows you to get familiar with the equipment whilst learning some fundamental teaching points.

However, if this option isn’t available you’ll be amazed at how intuitive and safe a TRX is to use. The only things you should check are that the TRX is securely fastened to its anchor point and you have enough space around you. 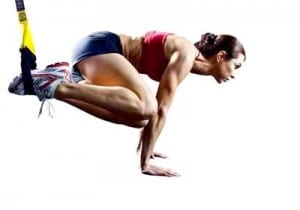 A good routine for a beginner would target all muscle groups and last somewhere in the region of 30 minutes.

To begin, you would warm up and mobilise as you would prior to any workout.

You’ll notice pretty much every movement involves abdominal activation, which is another huge benefit of using TRX – you get a great core workout with movements that ordinarily isolate one body part. 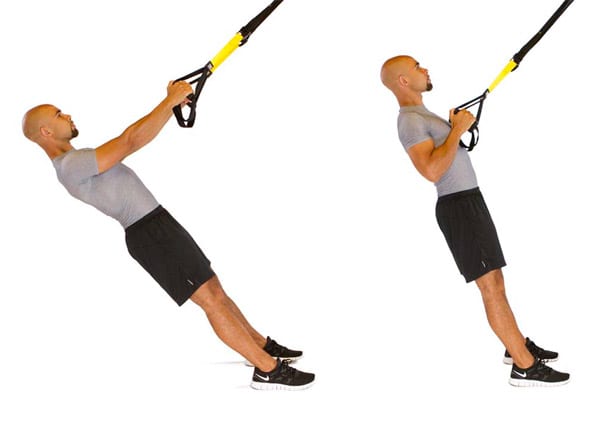 b) Take a step forward so the TRX is taut then lean back slightly so the TRX is supporting your bodyweight: Your arms will now be straight and you’re ready to begin

c) Pulling through your arms, bring your chest to meet your hands bending at the elbows, squeezing your shoulder blades together as you reach the top

d) Lower yourself back to your starting point under control to complete 1 rep.

d) Return to your starting point by extending your elbows to straighten your arms.

a) Stand facing the anchor point, holding the TRX with a supine (underhand) grip

c) Begin the movement by bringing your hands to you chest by bending at the elbows: **Core stability comes into play here as you’ll need to keep your back straight to allow the leverage to have its effect

d) Finish the repetition by extending your elbows slowly back to the starting point.

a) Begin in the position that you would doing frontal raise dumbbells: Face the anchor point to ensure the TRX is taut to provide adequate resistance

b) Place hands besides your hips with an overhand grip

d) At the top of the movement you should pause and allow a slow return to the starting point. 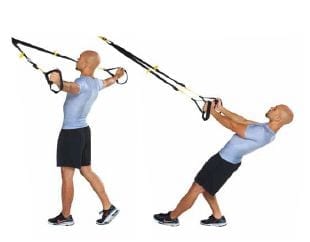 b) Separate your arms by squeezing your shoulder blades together: the further you spread your arms the more leverage you feel

d) To repeat the repetition slowly reverse the movement. 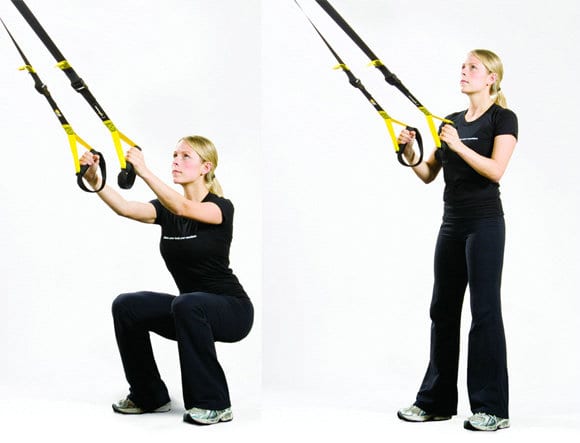 a) Begin by facing the anchor point – take hold of the TRX with a neutral grip to take all the slack, ensuring the TRX is supporting your bodyweight

d) Complete the rep by returning to your starting point with slightly bent knees.

a) Facing away from the anchor, place your left foot through both TRX handles leaving your right foot planted

c) As your body lowers, begin to stretch the foot in the TRX backwards.

d) Avoid going deeper than 90 degrees as the main focus of this movement is stability.

TRX movements can be performed at higher rep ranges than their resistance based counterparts – meaning for each exercise you should look to complete 15-20 reps each set.

Try and be strict with rest times too as this is usually what dictates the intensity of a session.

– 45 seconds rest between each set and

– 1 minute between each new exercise.

This session can quite easily be performed twice weekly for around 3-4 weeks.

You’ll gradually increase core stability and balance and be ready to try some more advanced movements in no time!

How Many Calories Are Burned During Weight Lifting?