Warming up for a football game is the right moment to prepare your muscles and mind for the challenge you’re about to put yourself under. You can perform a perfect warm-up psychologically, but if you haven’t got sufficient blood-flow to the working muscles, performance levels won’t peak and you could end up with an injury.

There are four different stages to a warm-up for a sports game, and that’s not just with football. You begin with a light pulse raiser for several minutes, before eventually building your way to ball-specific drills. It is recommended that you give yourselves between 30 and 45 minutes for a complete warm-up before a game of football. It goes without saying really, doesn’t it? You need to begin with a steady flow of blood all across the body to prepare the working muscles with what lies ahead. Working over a space of between 15 and 20 yards, you need to work yourself into a light sweat in order to raise the core body temperature. You can use the 18-yard box as a guideline for the distance you are working for as well.

Begin by working in-line with the 18-yard box to and from a couple of times with a steady jog. Once you’ve increased the heart rate, you can look to implement the dynamic stretches.

Dynamic stretching is active movements of the muscles that bring them to a stretch, but not in a held position, as is the case with static stretching. It also sends signals from your brain to your muscle fibres in that particular area to do work.

Away from the science behind it, it can include exercises such as; high knees, ‘open/close the gate’, lunges, skipping, among many other things.

3 x 18-yard steady jogs, slowly increasing the pace each time. Rest for 20 seconds after the three jogs before moving into the dynamic stretching stage.

3 x high knees run/lunge 9-yard superset. Work out approximately where halfway of the 18-yard box is, and work quickly for the first half of the area by exaggerating a sprint by bringing your knees up to just above your hips alternately. For the second part, lunge while keeping your back straight step forward with one leg, lowering your hips until both knees are bent at a 90-degree angle. Make sure your back knee doesn’t touch the ground and your front knee is directly above your ankle.

Rest 20 seconds between the three sets.

3 x open/close the gate. Working across the 18-yard box again, bring one leg up directly in front of you, before performing a semi-circle motion away from your body so that it is parallel to the ground, alternate with each leg.

Rest for 20 seconds at the end of the three sets before regrouping to move to the next stage of the warm-up. You can implement backwards jogging to which will work the mind as well as getting a feel for your spacial awareness. You can also vary the dynamic stretches to skipping and side lunges too.

Static stretching is the most common form of stretching and involves holding a comfortable position while working a particular muscle.

It is advised that you hold the position between 10 and 30 seconds. Static stretching will loosen up your muscles after you have performed stage one. Spend a few minutes altogether on this area.

The more enjoyable part of the warm-up, where the ball becomes part of the routine. Begin by setting up a square box, 15 yards by 15 yards. Split your team in half, and make sure that half is inside the grid, while the other is outside and separated around the perimeter of the area with a ball in hand.

On the whistle, the working group must find a free server on the perimeter who will set them for a side-foot volley back into their hands. The working group must keep the tempo high, and as soon as they’ve hit their volley into the hands of the server, they will go to the middle and back out again to find another free person.

They will work for 45 seconds before they swap over with the other half of the group and rest while they work. Repeat this three times. From this, you can lead into a slightly more tactical drill which also takes a tiny step into stage four of the warm-up too.

To avoid tedium, you can move onto a possession-based drill. Using your substitutes as the men on the outside this time (usually five). Assuming your goalkeeper is off warming-up elsewhere, split the other starting 10 in half. Play keep the ball with the team and a bit of excitement allowing five passes equal a goal. They can pass to the men on the outside whom must return the ball to the same half who gave them the ball initially and this counts as a pass.

Work for a minute at a time and have three sets. 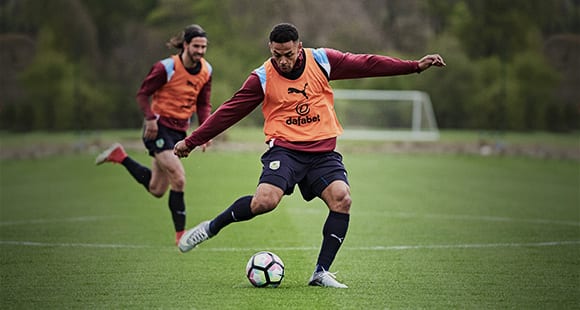 The serving drill you can vary by including headers, chest and volley, or ground passes. For the possession game, you can have two men working trying to regain possession from everyone else in a circle trying to keep hold of possession.

The final part of the warm-up gets you putting game-based ideas into practice. The strikers and midfielders can go and perform a shooting drill with the goalkeeper, while the defenders can do some ‘shape-work’.

If you have enough coaches or helpers present, you can have the forwards and midfielders in a single-file line about 20 yards from goal, passing into the helper – who will be stood on the edge of the box – who can set them for a shot at goal. This can be continued until 15-20 minutes before kick-off.

Defenders can be put into their shape. For example, if you’re starting with a standard 4-4-2, then get your full-backs in position but quite close together. You can serve them headers, volleys and passes to get them organised and communicating pre-match.

For the shooters, you can get them to play the ball into the coaches chest and they can then set them up for a volley. For the defenders, you can vary it by setting them from a shorter or longer distance. 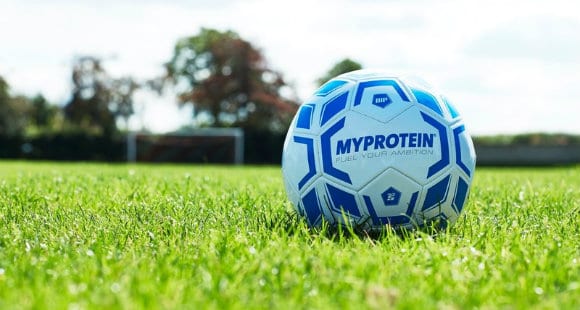 There is plenty of things to be considered while planning a warm-up before a game of football, and this begins with getting the blood flowing to the muscles before moving into sport-specific exercises. Plenty of time must be taken in this area so that you are fully prepared for the game ahead.

Are Potatoes Good For You | Nutrition & Benefits

How To Master Hamstring Curls | Techniques and…