Meet the guy battling cancer one barbell squat at a time.

Starting with an event in Manchester in 2017, Scott and his team have now taken it international, with competitions all over the world. So, how do you get into functional fitness — and how do you get good? Here’s what Scott has to say. 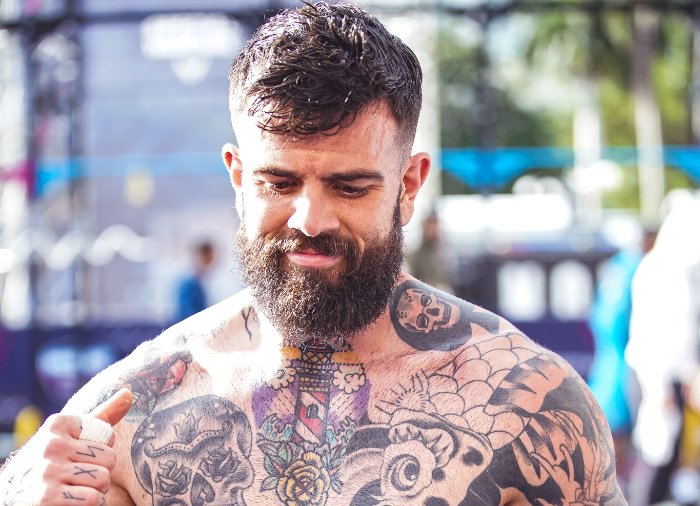 It doesn’t matter what you’ve done before

“I started at a really early age moving from Thai Boxing and Rugby to general gym training. Like most people, I was overweight as a young child and when I reached high school I realised that I needed to work hard to get that spot on the school sports teams.”

“Once I started Thai Boxing and rugby I continued to pick up sports left, right and centre and continued with this journey through to my twenties finding powerlifting and competing on the world stage of Powerlifting for five years.”

Starting out in functional fitness

“After five years of competing in Powerlifting, I needed a new challenge. Having become strong at squat, bench press and deadlift, I wanted to see if my internal drive could make me successful in functional fitness. Around two years ago I decided to focus on functional fitness and haven’t looked back.”

Just because he had a background in powerlifting didn’t mean transitioning to functional fitness was easy.

“The adjustment from being a top-level powerlifter to being a beginner in functional fitness was a real challenge. Every day there is a huge array of movements, challenges and workouts to continuously push and strive to become better and better.”

Functional fitness can take you into whole new environment each time you train — this challenge is what keeps it exciting.

“Even now competing in elite functional fitness events I am tested from running in -12 degrees across the mountains of Norway to swimming open water sea workouts in Miami.”

“The training style and workouts create an all-round athlete. Whilst training and competing in functional fitness, I have dropped over 15% body fat but maintained the same personal best lifts as well as learned new skills from walking on my hands to rope climbs and an array of gymnastics.”

☀️ Training in the sun is THE BEST⁣ ⁣ Ring muscle ups on these bad boys is another world, no big sets on these! Cannot wait to get back in the heat in Miami next for wodapoolza ⁣ ⁣ First session back in the UK today and way too much time warming up, I think I’ve got California soft already! ⁣ ⁣ Anyone have a favorite country for training get always?? @myproteinuk #beach #wod #travel #fitnessjourney

There’s one thing that functional fitness is known for — its hugely supportive community. This is something that draws Scott in and challenges him too.

“Community is a huge aspect, there is a worldwide openness to functional fitness which is unbelievable. I have visited gyms and competitions across the world and had the same warm welcome.”

“From a mental standpoint, the ever-changing challenge is amazing, this keeps your training and fitness journey fresh. You are continually being humbled by new workouts and movements whilst being able to progress.”

There’s no bigger community in functional fitness than the one created by Scott and his team. Battle Cancer is an international event that anyone can take part in, with one aim in mind — raising money for an awesome cause.

Want to get involved? Find out exactly how you can take part.

Train the Transverse Abdominis To Gain A Tiny Waist!

Should I Eat Less Protein For Less Intense Home…

How to Calculate Your Body Fat Percentage