This summer, Myprotein accepted the challenge to get down and dirty with Total Warrior, The Great Northern Mud Run. A race like no other, it’s made up of 25 punishing obstacles, 10 tonnes of ice and 100 tonnes of mud.

As part of the partnership, we sent 9 brave (some say brave, others might say stupid) team members to take on the challenging course alongside 7 of our ambassadors. I was one of the volunteers.

I should probably start by saying I’ve never done anything like this in my life, and as my place was only confirmed a week or so before the race day, it’s safe to say I was completely and utterly underprepared.

I suppose that I do have a fairly good level of basic fitness, and last month I did complete my first ever Half Marathon (yes, if there’s an opportunity to bring that up, I will take it every time) — but this is a whole different playing field.

I’ll put my hands up and admit straight away that I am seriously lacking in the upper-body strength department; I fall into that classic category of girls who only really ever train weights on leg day. After scanning through the list of obstacles that I was going to be tackling, I knew that this was probably going to be my downfall (quite literally if we’re talking about the monkey bars).

Plus, my height (or lack of) will probably be another factor that doesn’t exactly work to my advantage — obstacles like “The Alps”, “Steeplechase” and “High Jump” sound like they could be that little bit harder for those who are 5’3”, just. 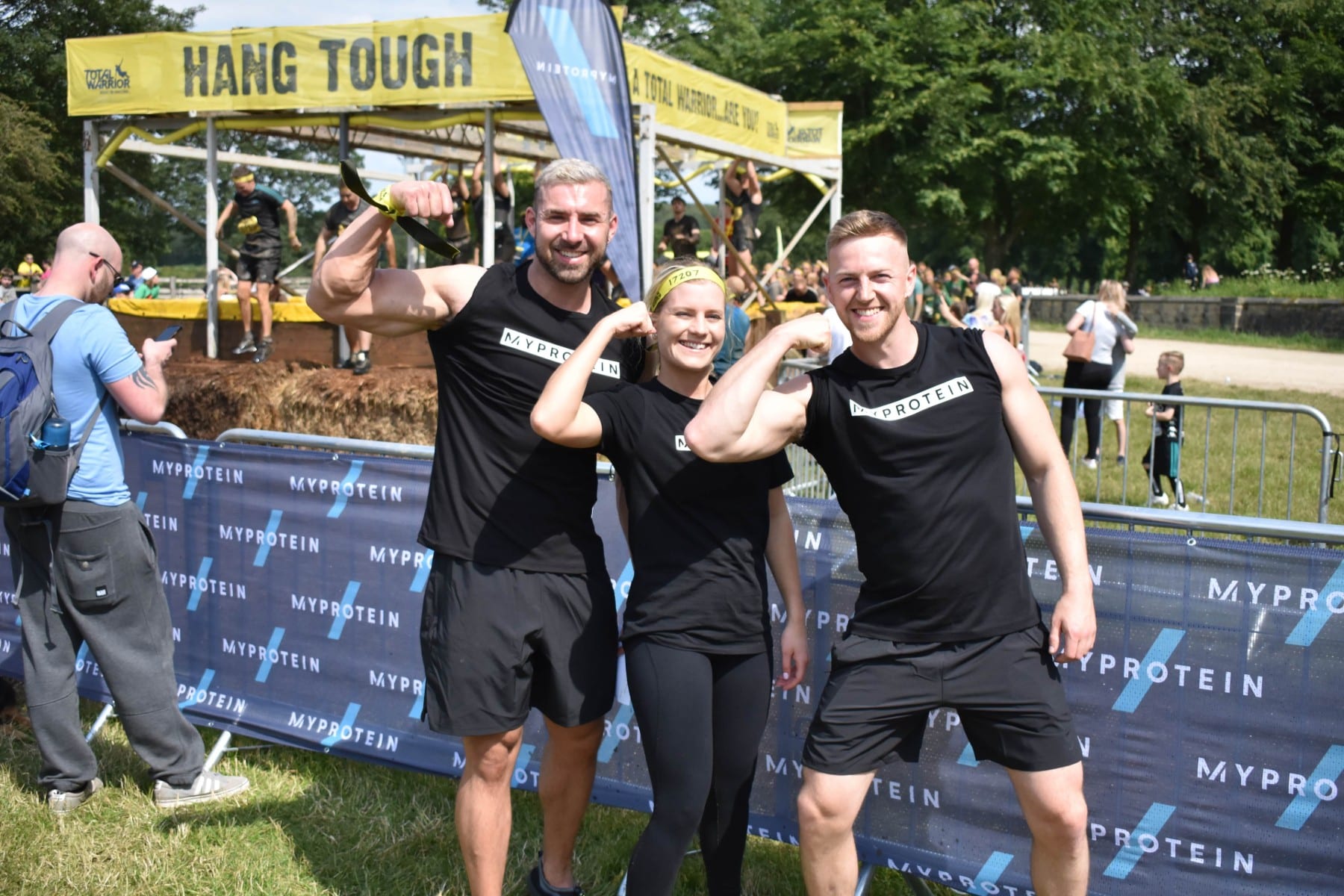 That said, there’s definitely a part of me that’s strangely excited to throw myself in at the deep end of all of these mud pools and ice plunges. Maybe it’s just because it’s something completely different and new, or maybe it’s the fact that I got really into watching Celebrity SAS: Who Dares Wins this year — either way I think I just want to prove to myself that I have it in me to do this.

Whether or not I do it well is a separate thing.

Despite a very rainy and grey start to June, the weather actually decided to be kind to us on the day of the race — to the point where a lot of us regretted not putting on sun cream beforehand. Our squad met at Bramham Park in Leeds where the course is held, and got prepped and primed in true Myprotein style (i.e. with plenty of THE Pre-Workout and an ambassador led warm-up, thanks @charles_mance).

Our wave was the final one of the day, kicking off at 4pm, giving us plenty of time to soak up the atmosphere and see first-hand what was in store for us. From the looks of all the finishers that were milling around, it was clear that we were about to get very muddy.

Before I knew it, our wave was called up, and the nervous excitement that had my stomach in knots grew even more by the fact that we had to scale a 7ft wooden fence to even get to the starting line. This was definitely not going to be a conventional race.

After a few tense minutes and a rallying pep talk from the DJ about how high his expectations were for this final wave, we were finally off!

It was a fairly gentle start — if you consider a 1k jog across fields “gentle” — and then the first obstacle appeared, which was Trump Wall. Quite a misleading name might I add, as there were actually two of these walls to get over. Luckily for me, I was surrounded by the more than willing members of #TeamMyprotein who helped to boost me over the 8ft height. We actually did the whole course together as a squad, which wasn’t just great for the whole teamwork thing, but meant that no faceplant in the mud went missed (my own included).

Here were some of the highlights:

Cement Mixer – the official description of this delightful obstacle was a “bombhole of unbelievable mud” and I can confirm this to be more than accurate. Forget easing yourself in, you’re quite literally thrown in at the deep end and submerged up to your waist in thick, oozing mud. Getting out with both shoes on proved to be a challenge in itself.

Human BBQ — for obvious reasons, this one had caught my attention from the moment I agreed to run the course. I was both intrigued and appalled by the name from the word go, and I had good reason to be. For this obstacle I had to “take a leap of faith” over 2ft high flames into a 4ft deep pool of cold, muddy water. Just before I took the run up a voice in the back of my head asked, “are you really about to do this?”

Mud Moguls — this was a 100 metre stretch of 3-metre-high mud hills. Sounds pretty simple on the face of it, but by this point you’re already soaking wet and slipping about, so every step has you close to stacking it face first, or on your hands and knees scrabbling in the mud to regain your balance. Not pretty.

Claustrophobe — while I’m not cripplingly claustrophobic, I’m not exactly a fan of squeezing myself into small spaces, so this one did get my heart rate going. It involved crawling/dragging yourself through a cement tube, with the thoughtful touch of another muddy pool waiting for you on the other side. This meant twisting yourself round at the end of the tube to avoid going into the water face first, which was, of course, much easier said than done.

Worm Muncher — another great name, right? This was another obstacle that had been talked about a lot before the race and was definitely a source of concern amongst the group. Worm Muncher was a 50ft long stretch of deep mud that had to be crawled through underneath barbed wire. At this point I still had a GoPro strapped to my head (more on this later) so my gut instincts were seriously torn between protecting that from the mud below and steering well clear of the sharp metal above me.

High Jump — okay, back to the GoPro situation. For the whole course, I’d not only been dealing with the mud, sweat, and sun beating down on me, but I’d done it all with a GoPro strapped to my head. Really not my best look, but all in the name of capturing content — every slip, trip and swear.

Until this obstacle, that is. Sadly, it didn’t survive the jump from a platform into an icy pool of water… a pretty obvious mistake in hindsight. We’re still waiting to hear if it’s fished out from the pit once it’s been drained, so maybe by some miracle the precious footage can be recovered. If not, it’s probably saved me some dignity at least. 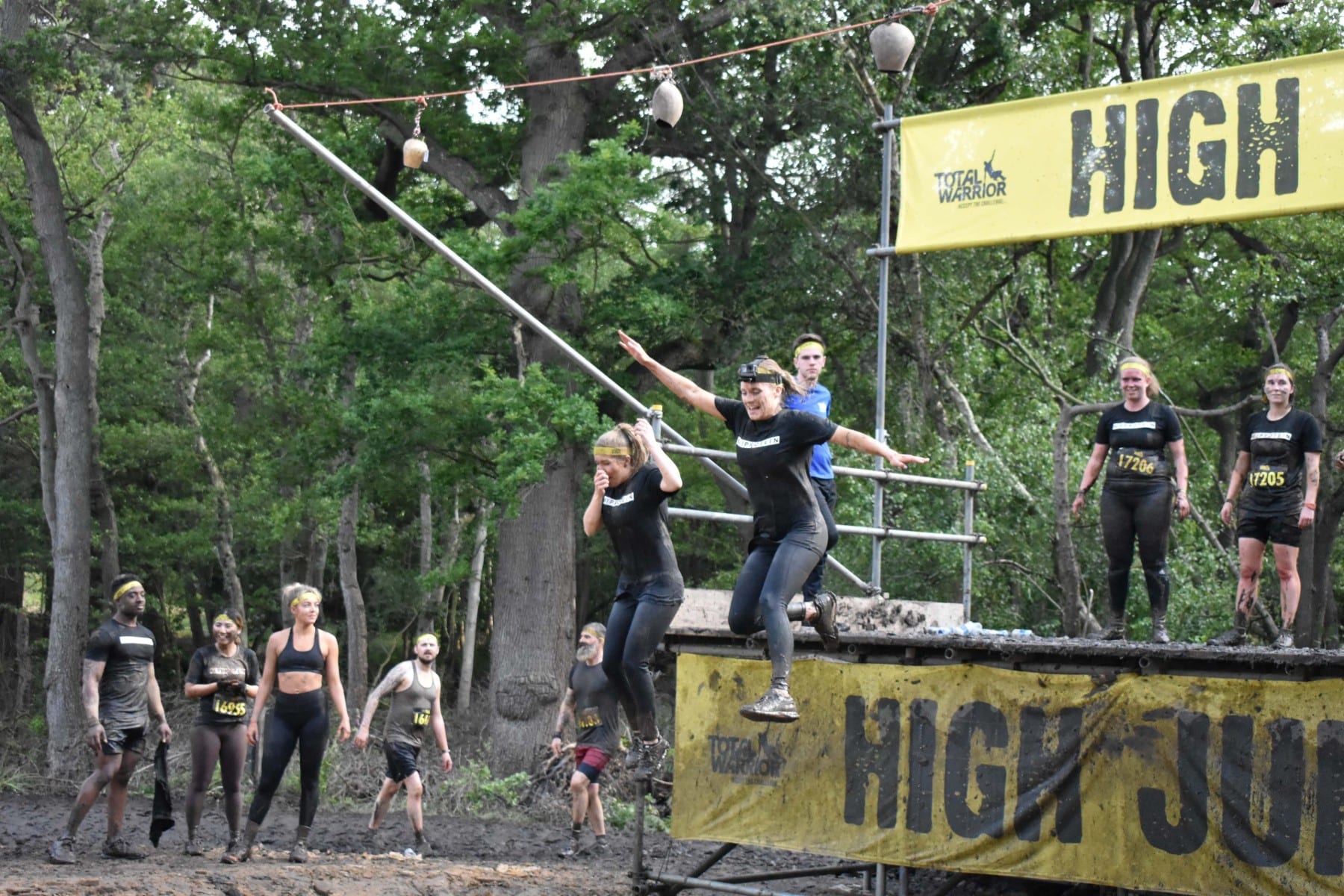 The last sighting of the GoPro

Pasadero — speaking of dignity… this was a real low point on the course for me. When compared to some of the previous obstacles, this one looked pretty inoffensive. But appearances can be deceiving. Pasadero was a hollow plastic walkway floating on top of, you guessed it, muddy water. The toughest part, as I soon found out, was leaping from the slippery muddy bank onto the walkway — I managed to get one foot on, before I completely lost my balance and fell straight in, with one leg still in the air.

No, I never knew I could do the splits vertically. Yes, the photo below has been circulated around my team. 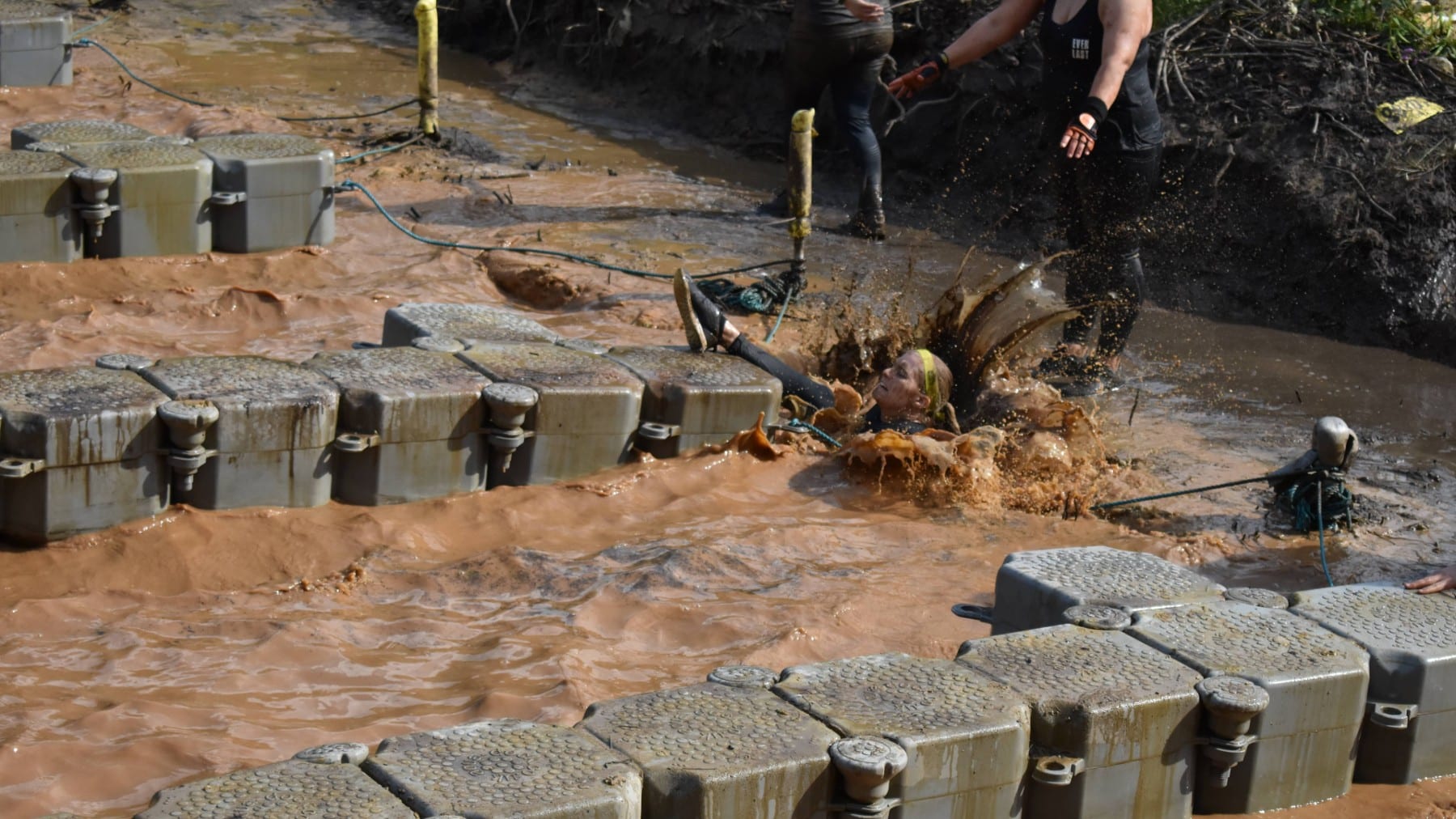 Alps — just a couple of A-frame mountains to drag yourself over. When you’re already exhausted, mud-spattered and soaking wet. No big deal.

Slideaway — this was an 120ft water slide. Literally every child’s dream and definitely my favourite part of the day, regardless of the amount of mud that was waiting at the bottom.

Hang Tough — probably the hardest obstacle of them all, and they cruelly put it right at the end when your limbs are already feeling like spaghetti. It was 20ft of monkey bars across deep, muddy water, oh and the monkey bars turned to loops of rope for the final stretch. In the queue, I watched as countless people got one muddy paw on the first bar, only to slide straight off and into the murky water below. I gritted my teeth and promised myself I would be making it further than that.

It was surprisingly painful, and every time I was left hanging from just my left arm I realised just how much weaker it was compared to the other side, but I’m proud to say I made it almost to the very end. The switch to the rope loops was just a step too far. 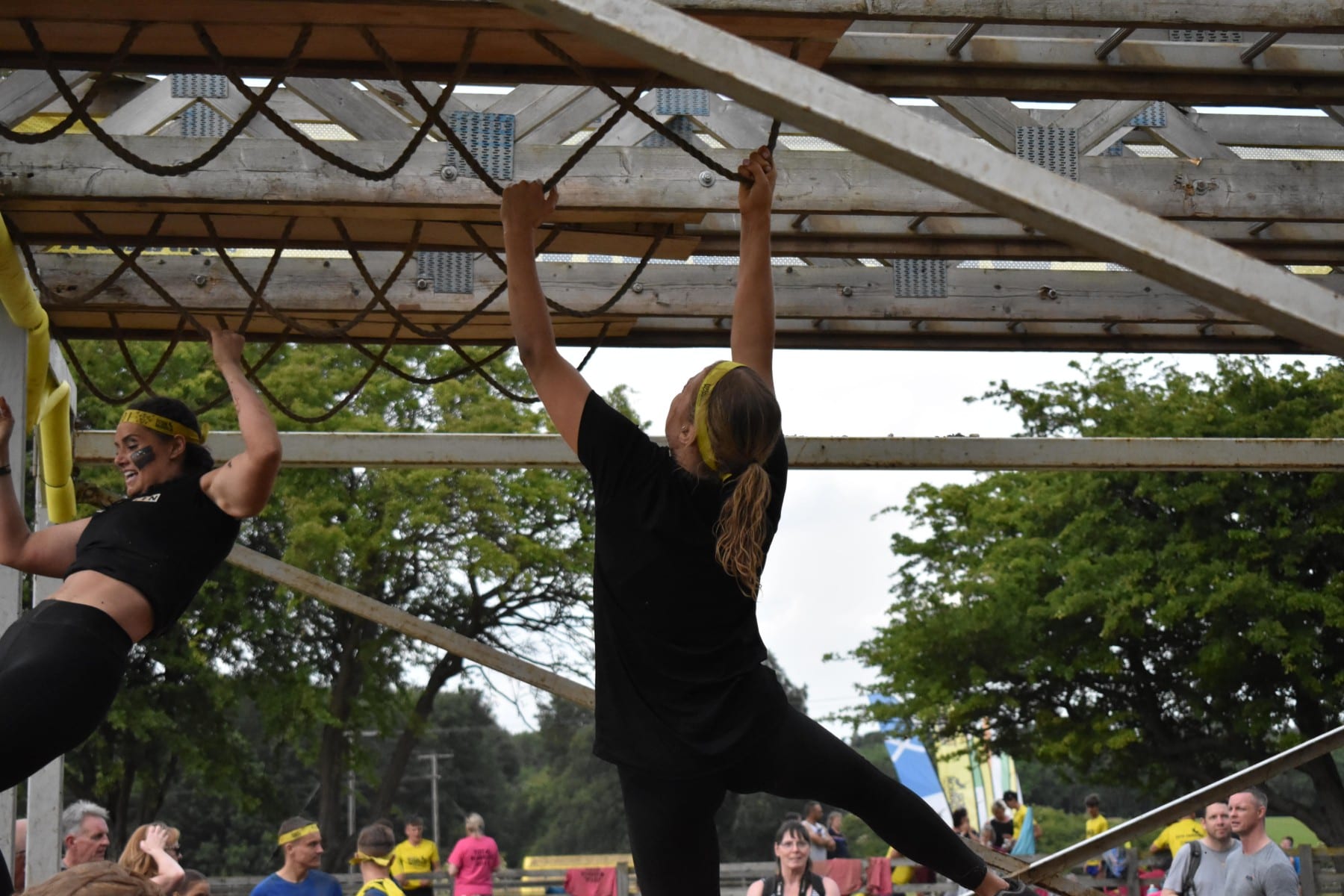 Peaks of Pain — the final obstacle required every last drop of determination I had left in the tank. It was a 15ft high wall with just a dangling rope for you to get up with. The hardest part for me was that the rope was just that bit too high for me to reach, so I had to take a run up and jump to grab hold of it. This took two attempts but I did manage it eventually, and then I slowly but surely dragged myself to the top. 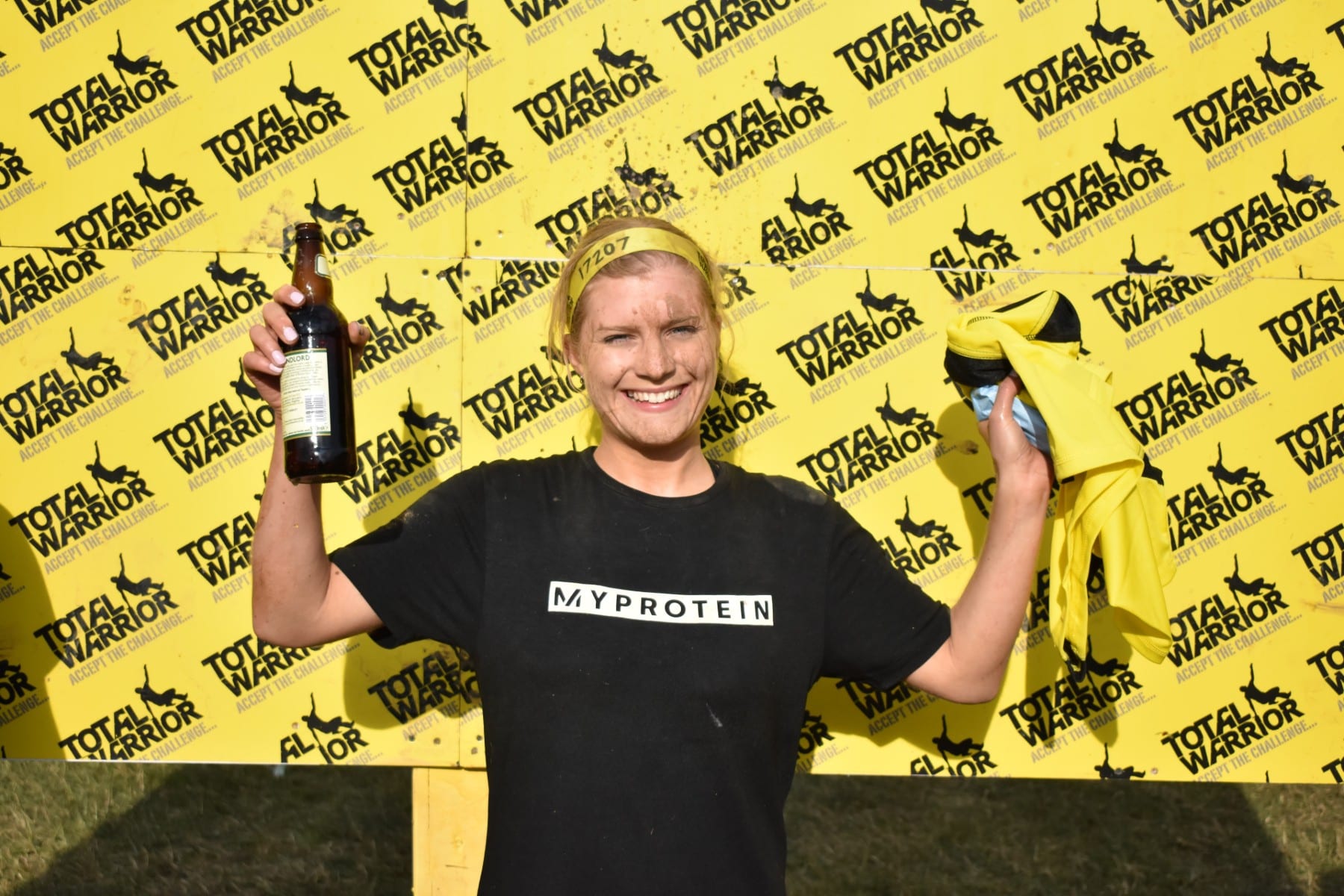 Let’s just say that nothing has ever tasted so good as the free beer and 6 Layer Bar waiting for me at the finishing line.

Want to know more about what happened at Total Warrior? Check out this article.

Burnt Out? | Signs and Symptoms of Overtraining