UFC fighter, two belt-holder and the man who brought Floyd out of retirement. So this is who you want to train like? You should already know that his regimen isn’t going to be for the faint-hearted. 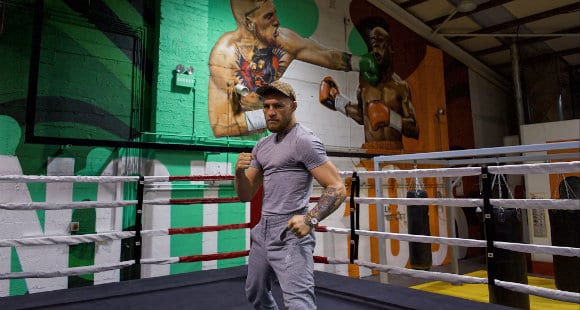 Let’s begin with the obvious: martial arts training. If you’re here to train like McGregor to get in shape rather than take heads and win belts, the principles still apply. Whether it’s striking, grappling or sparring, each count as conditioning and endurance training. If combat sports are not for you, you can still achieve the same outcomes (without the broken nose) by borrowing the elements that you want. For example, bag work and the likes of boxercise classes will reap the rewards of boxing and kickboxing, shedding pounds and strengthening your limbs and abs, without the contact.

For martial artists and boxers, sparring is an optimal way of putting all of your technique into a context while getting your heart rate up and testing your strength on your friendly opponent.
Try to imitate the physical exertion of sparring as much as you can, if you aren’t a martial artist. This means high-intensity interval training.

Conor McGregor, being a feather and light weight has a physique of minimal body fat and no bulk. When it comes to weight and cardio training you want to avoid mass muscle workouts, which mean more size, not strength. Your focus should be on body weight and natural resistance training with an emphasis on cardio training.

As it happens, you can train precisely like McGregor by following his 12-week zone based workout program, known as the F.A.S.T. conditioning program. This is designed with aerobic and anaerobic training with an emphasis on explosive power, ultimate speed and endurance for all over conditioning.

This focuses on cycling, rowing, running and boxing. The training is split into three categories (the green, orange and red zones) with the difficulty and gains increasing from zone to zone. 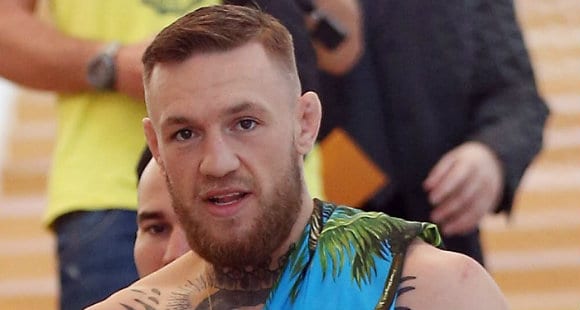 You don’t have to search very far on social media before you come across a picture of McGregor training. 9 out of 10 times he is performing exercises that involve only his own body weight. Here we’ll take a look at a few of the favourites that could achieve the same effect.

Movement is key. McGregor often promotes his movement-based training that allows him his greater range and dexterity in the octagon as well as strength and conditioning.
Muscle ups. These rely solely on natural strength, working on your back, biceps, triceps and chest while developing the wrists and rotator cuffs – both of which are vital for striking.
Lizard walks. A youtube video will point out exactly how much strength and agility these require, working your abs, upper body and lower body.

Avoid machine weights and fixed movements. That doesn’t leave out repetitions (ie. muscle ups, press ups, crunches) which should be performed the same each time; it means not limiting you to a fixed range of movement such as a bench or shoulder press, which really builds the muscles around one movement. You want to focus on exercises that allow as much movement and work as many muscles as possible at the same time.

For this reason, isolating exercises may not be the best approach and burden your joints. Instead, think in terms of overall coverage as well as single leg exercises for balance. A good starting point is single leg squats using kettle bells.

Yoga is a cornerstone for many MMA fighters. Its benefits are obvious for movement, balance and stretching. 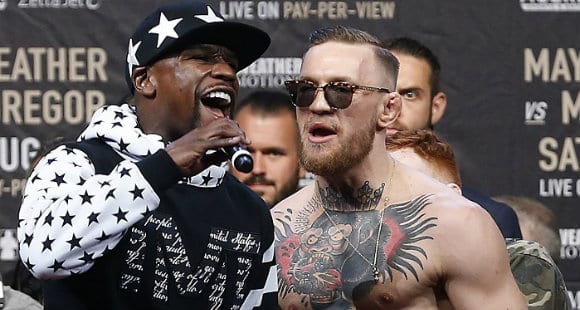 For a lean, strong body, nutrition is a considerable factor. McGregor himself said in one interview: “I eat good meat – chicken, salmon, some steak – and a lot of quality greens and some fruits like bananas… Getting enough protein is important when I train, to help build muscle and recover, so I’ll supplement with protein shakes. I drink mostly water or coconut water. It’s important to stay hydrated – first thing I do in the morning is stretch and drink water. ”

Top 5 Dairy Alternatives To Cut Down On Lactose Intolerance

What Makes THE Whey PRO?

How Much Water Should I Drink In A Day?