The box jump is one of my all-time favourite movements, and a useful technical skill to master. Plyometric (explosive) training is a lot of fun, and can be used as a real challenge to improve power, strength, and fitness.

Box jumps typically involve a simple forward jump onto a box around knee height, but in reality this exercise could entail a single jump or series of jumps from any direction, in any direction, onto a platform of any height or shape. The possibilities really are endless.

Box jumps are a highly transferable movement. This means that the skill, power, and strength required to perform a box jump are useful for a number of applications!

The ability to jump with good mechanics is essential for many athletes, including runners, team sport players, and gymnasts.

Each sport or practice requires a specific range of movement patterns of its athletes. For instance, running is essentially a series of hops from one foot to the other. Ball sports like basketball, rugby, and cricket require accuracy and explosive power when directing energy into throwing a ball, or jumping into space to catch it. 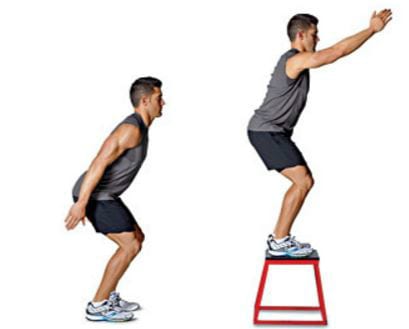 Specific requirements vary depending on the sport and player position:

? Goalkeepers in football must be able to leap high and long to cover the space surrounding their net

? A shooting player in basketball must be able to jump high into the air whilst guarding the ball from the defending players.

Plyometric training is a fantastic method of increasing your capacity to generate power, and move your body in space in an efficient manner.

Sportspeople who drill in clean movement patterns and jumping skills give themselves a strong advantage against their opponents. Even for the non-competitive athlete, in making each hop, skip, or jump as safe and efficient as possible, we enable ourselves to enjoy productive workouts, play sports, and go about daily life with a low risk of injury.

When working out which type of box jump is most applicable for you, it’s important to consider your training goals, and which movement patterns you aim to reinforce or strengthen.

? You can get really creative when adding box jumps into your programming, so think outside the box!

? Perhaps jumping whilst throwing or catching a ball might be useful for you, or starting from a kneeling position.

One dangerously overlooked element when it comes to box jumps is technique. For many people, it simply doesn’t occur that a freestyle movement such as this would require much technical focus. Jump on, jump off, right?

For others, it can be very difficult to control body positioning and extraneous movement during this type of fast, explosive activity, particularly if the aim is to jump as high, fast, or far as possible. 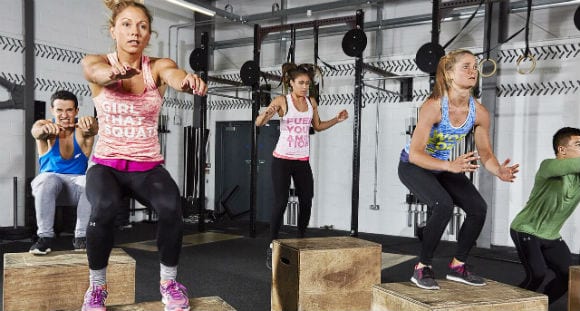 Poor jumping technique can, and often does, lead to joint pain and injury. This can occur in two main ways:

1) Over time, improper movement patterns cause damage to joint structures including wearing away of cartilage or stress to tendons or ligaments

2) Poor movement patterns under high impact can cause ruptures or complete tears to ligaments or tendons, and could even result in fractures or broken bones.

Let’s cover some of the most common technique errors that can occur when training box jumps:

Valgus knee is a common movement dysfunction where the knees collapse inwards, following the path of least resistance, during squat or lunge-type actions, and is the typical cause of ACL damage commonly seen in athletes. In a box jump a valgus position could occur not just in landing, but also in taking off. This issue can be managed by strengthening the leg muscles, more specifically the glutes, with a focus on hip external rotation and abduction. In cases where the issue is not leg strength, a simple focus on technique can fix the motor control issues causing the knees to collapse.

It can be easy to focus solely on the more impressive, athletic aspects of a box jump such as its height or distance, and forget about the quality of the landing. This is the most impactful element of jumping, and of course where most injuries occur. Protect your joints by landing softly, absorbing the impact of your jump.

Landing in an awkward position such as on your heels, or in ankle inversion or eversion can also cause damage to your joints and soft tissues. Avoid sprains and strains by filming your jump and landing from multiple angles, assessing your technique, and using the footage to inform further practice.

Box jumps are a lot of fun, and a great way to add an explosive element to your workouts. They are also generally not considered a typical strength training exercise, and it is likely for these reasons that many people overuse box jumps in training. Even with great form, there is a limit to the amount of impact your body can handle.

In much the same way as weight training, start small using lower or fewer jumps, gradually increasing the intensity and frequency over time. It’s also important to be aware that with fatigue we can often compromise on form, and so it’s wise to stop once you’re losing technique, rather than when you’re exhausted.

In a typical, straightforward box jump, it’s advisable to follow the same movement cues as in a squat.

If you are maintaining a neutral spine, with your toes pointing forward, and knees pointing toward your little toes (rather than your big toes), you can be sure your technique is safe and efficient, and that you’re getting the full benefits from this awesome exercise!

The UK’s Fittest Man’s Talks About The Injury That…

The 7 Best Sugar Alternatives to Try

Barbell Workout For Women | Tone Up With These Seven…

Save 40% off Best Sellers | Use code: BEST Shop Now