The first rule of the Tyler Durden workout is low body fat, high reps and heavy weights with cardio in between. At one point in Fight Club, the narrator, played by Edward Norton says he feels sorry for guys trapped in gyms… but if you want to achieve the ripped torso of Brad Pitt, you may have to ignore that line.
Though Pitt is lean in the film, at around 5 percent body fat, 155lbs at 6 foot tall, you might be surprised to know that it was achieved by more of a bodybuilder’s approach that purely slimming and abs workouts.
Though he looks ripped on screen, a closer look at camera angles and bigger supporting actors in some shorts reveal how slight Pitt is by comparison. Ripped, yes, but mass? No.
The workout plan involved training one muscle group each day, as done by bodybuilders. For each exercise, he did 3 sets of 15 reps with a 1-minute rest in between sets. Another way that the workout was similar to a bodybuilder’s routine was adopting the muscle failure approach by lifting a heavyweight in order to build muscle mass.
An alternative to this – and one also favoured by Arnold Schwarzenegger for building mass – is variations on drop-sets. For these, you can keep the vary each factor: keep the weight the same and increase the number of reps in each set, or keep the reps the same and increase the weight with each set. Our suggestion is to alter both so that you get the benefits of high reps and heavy lifting. For this, you should perform 3 sets beginning at a high number of reps and a lower weight, then be lowering the reps as you increase the weight.
We’ve put together a suggested plan for what your workout week could look like for resistance training and cardio. This is based on the use of drop sets and addressing each muscle group on a different day.

? Boxing – 5 x 3 minute rounds. The film is Fight Club, after all. Both Pitt and co-star Edward Norton reportedly trained at boxing gyms. This not only will have

Perhaps the standout feature of Tyler Durden’s physique is his abs. This is predominantly the result of Pitt’s low body fat percentage, but fitting in 2-3 abs workouts along with the above schedule can only help. When it comes to abs training, diversity is key and you may not realise how many of the above exercises will strengthen your abs.
Try the following, and be sure to mix them up to hit the auxiliary muscles: 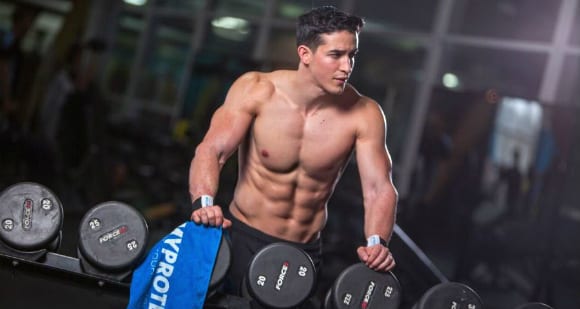 Lean muscle is how you would describe Pitt’s build in the film. If you analyse the physique a muscle group at a time you’ll see that even the more prominent ones like the chest, lats and traps are not actually very broad. They appear shredded because of low body fat.
You could well be crunching serious numbers on a regular basis, but if your body fat isn’t around 10 percent then the fruits of all those sit-ups aren’t going to shine through in the form of a six-pack. If you’re a heavyweight lifter and mass builder, you’ll be consuming a high amount of calories to make those gains.
If you’re looking to lose body fat, you should think in the low term as opposed to a flash diet that will leave you without the strength to benefit from abs workouts. By long term, we suggest you stick to a plan that spans from two months – 20 weeks, lowering your intake of calories gradually over that time.
You may try a calorie deficit on your rest days, but evidence suggests that your body needs the energy as it continues to burn after high-intensity workouts. A high protein and carbs diet is essential for being able to handle (and reap the rewards) of the above workout.
There are several different opinions regarding the effectiveness of flash dieting and the chicken and egg question of whether to put on mass to build muscle (and later trim the fat) or attempt to build while continuing to burn. For the Tyler Durden physique, we suggest the latter.

Charlotte is a fitness and nutrition writer and blogger based in Manchester. Her articles have been featured in Cosmopolitan and the London Evening Standard.

Walking With Your Partner Could Be Slowing You Down…

What Is The Egg Diet?

5 Healthy Tips For Transitioning Into A Plant Based Diet

How To Train Your Legs, Bums and Tums Without Equipment