The arm is an upper body limb that is located between the shoulder and elbow joint. With reference to functionality; the arm flexes, extends, supinates and pronates almost any movement pattern.

The forearm is comprised of the ulna and the radius; when joined together it is referred to as the radioulnar. The muscle is a flexor of the elbow joint which causes exercise movements such as bicep curls. It also has the ability to rotate to put our arms in a supinated or a pronated position during exercise, contributing to exercises such as supinated barbell rows, pronated cable curls etc.

Despite forearms being evidently important to upper body functionality, forearms are not a ‘common’ body part to focus on individually within a training routine.

So, why should you train the forearm muscles individually?

When the wrist is transferred through different ranges of motion throughout movements such as forearm curls, they can generate tremendous grip strength. This grip strength can be useful in day-to-day life and in sporting performance.

An improved grip strength may also lead to an improved performance in many compound lifts. Many vital movements to any training program such as barbell deadlifts, rows, bench presses; require an awful lot of grip strength. By having stronger forearms, there is a greater chance that we will be able to perform the three phases (preparation, execution, recovery) of many lifts more better, via enhanced grip strength.

Training your wrists and forearms will lead to enhanced hand and finger dexterity which will in turn benefit many daily activities such as writing, pushing and pulling through improved grip strength, generally gripping objects and even gaming! Yes thats right, gaming!

Many sports  such as judo, MMA, baseball, and American Football involve grip like motions which are consequently dependent on the grip and stabilisation supplied by the forearm. Numerous activities in sports and athletics rely on forearms strength and stability; this may be enough to convince an athlete to train their forearms.

Training your forearms and wrists will in turn strengthen the wrist flexors. Strengthening wrist flexors will allow wrists to bare the physical strain they get placed under in certain compound movements such as the military press where the wrist is positioned in a hyper-extended shape.

So, now that we have thoroughly discussed the benefits of forearm training, lets take a look at one of many exercises can be undertaken to improve forearm and wrist strength – the barbell wrist curl exercise.

1) Firstly, it is preferred preference as to whether the exercise is performed sitting upright on a bench with arms rested again the quads – or with your arms over a weights bench for stability (see image) 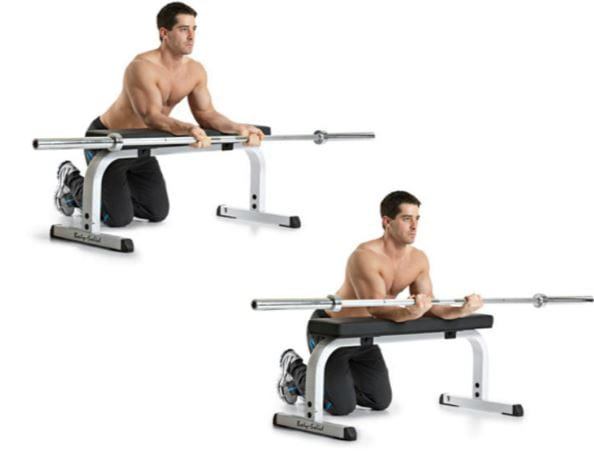 This movement can be performed in either a pronated girl (palms facing downwards) or a supinated grip; for this exercise guide, there will be a focus on the supinated grip format.

2) As you exhale your breath, curl your wrist upwards as far as possible.

3) Focus on total forearm and wrist contraction throughout. No other part of the arm should be involved.

4) As you breath in, slowly release your wrists back to the starting position. Aim to control the movement especially through this part of the movement (Eccentric Part) as any uncontrolled movements could lead to wrist sprain or other injuries.

5) Perform this movement for the designated amount of repetitions.

Note | Throughout the movement, try to refrain from swinging and moving the arms via momentum; the tension and stimulus should only be placed on the wrist and forearms.

? Not Training Them Enough

Not many people are born with an impressive set of forearms. Equally so, forearms are the same as any other muscle; they will grow once they are trained, tensioned and stimulated!

Simply add one or two forearm exercises such as forearm curls after you train biceps. Alternatively, if your forearms typically are exhausted after training biceps, add them after a workout whereby they are not touched at all. For example, train forearms after you have trained your abs or after legs!

Almost everyone has one hand with a stronger forearm/grip strength than the other. Therefore, it is key that we place an importance on training each arm singularly to adequately isolate and improve this muscular imbalance.

? Too Much Momentum, Not Enough Contraction

Unlike the bench press or the back squat, the forearm curl has a short range of motion. If we swing, add momentum or have poor form, all that will be achieved is an even shorter range. In doing so there will be less of a contraction, muscular stretch and ultimately less stimulation for the forearm.

To prevent this, chose a weight that you can comfortably perform the full range of motion and emphasise a sufficient contraction, squeeze and a slow eccentric release.

Similar to the calf muscle, the forearms are used to low intensity movements during the day (writing, opening doors, shaking hands etc), and due to this reason, they are extremely adaptive. In order to prevent complacency and monotony; change the rep range to shock the muscle and therefore to prevent your workouts from becoming stagnated.

For example, one session perform moderately high repetitions (8-12) and the next, do the same exercise but lower the weight slightly and perform for higher repetitions (15-20).

Fitting In Exercise Around The 9-5

Challenge Yourself To This 10-Minute Energy Shot…

The Rotator Cuff: Why It Is So Important? |…