There is no doubt about it, having an impressive aesthetic physique is one thing, but being able to use it properly and athletically is a whole new ball game. So how do we achieve this and what can we do? Ladies and gentlemen; lets talk olympic lifting!

Olympic lifting is a ballistic movement in the modern olympic programme whereby an athlete will perform a 1-rep maximum single lift of a weighted Olympic barbell. The two predominant olympic lifts are the barbell snatch and the clean and jerk.

In this article we will overview the barbell snatch. From the following passage you are going to learn the key benefits of the snatch, how to perform it effectively and the training implications.

Whilst the barbell snatch is predominantly used for athletic events/sports requiring jumping, throwing and sprinting; the movement is being widely applied to a variety of sports such as rugby and football due to the implication of the sports specific triple extension movement (extension from the ankle, knee and hip joint) and the amount of power/speed developed.

So…what other benefits can we come to expect from the barbell snatch?

The barbell snatch is a compound movement (involves movement at more than one joint site) and thus we can expect the movement to cause a dramatic positive hormonal stimulation, burn a severe amount of calories as well as activating almost every muscle fibre from head to toe!

When creating a training program for an athlete, whatever sport it may be; one of the key principals is ‘Specificity’. Relating to the SAID principal, essentially whatever demands are placed on an athlete, the athlete will adapt to that particular demand. Olympic lifts such as the snatch are extremely useful when looking to optimise peak power output in performance as well as rate of force development; two attributes extremely relevant to almost any sport nowadays.

Compound movements like the snatch are not only significant calorie burners, but they also slash your session time in half. Instead of performing bicep curls to target the biceps and quad extensions to target the quadriceps – the snatch you can target almost every body-part from your head to toe – in half the time.

Being able to neurally stimulate your Central Nervous System (CNS) during or before exercise is essential to optimise performance levels. In terms of relative proportion of total motor units recruited during exercise, research has shown that the barbell snatch will recruit 90% of your body’s total motor units. Even as a bodybuilder/fitness model, this application should be considered. It has been shown that performing a few explosive movements such as snatches, clap-ups or squats prior to a session will stimulate your CNS massively via the process of post activation potentiation (PAP). PAP is where there is an increase in rate of force development due to previous muscular activation.

You can perform a barbell snatch almost anywhere; all that is required is a barbell and some weight plates; thus making it an extremely versatile and practical movement. Whilst performing a bilateral (2 hands) barbell snatch is only achievable with a barbell, a uni-lateral (one hand) snatch can be performed with a host of different pieces of equipment, allowing you to add some variety to your plan. Single-arm snatches can be performed with a dumbbell, kettlebell, cables, weight plates and more. Preventing boredom is undoubtedly one of the key components in designing a realistic yet effective training plan.

How to Perform The
Barbell Snatch 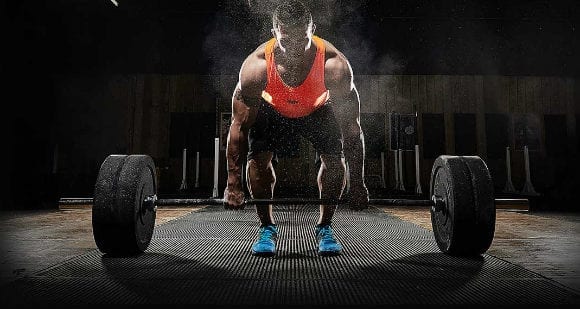 Begin with your feet positioned shoulder width apart with the bar almost touching the shins. Prior to any of this, I would suggest visually imagining the process and ensuring you know the correct steps to take.

Barbell should be held in the crease of the hips, then hands placed where they naturally fall in this position. Whilst grasping the barbell, lower your torso towards the ground whilst keeping your chest and neck upright with your head facing forwards.

Once this position has been achieved, your shoulders and traps should be positioned slightly in front of the barbell, whilst the rest of the body is still upright and facing forwards.

When initially pulling the barbell, aim to generate as much power as possible via a driving motion through the lower body; predominantly, the heels. The chest and back should both remain in the same position as during the preparation phase.

To perform the actual pull of the snatch movement, aim to initiate the triple extensions of the hips, knees and ankle; allowing you to drive the barbell upwards as fast as you possibly can. Again, keeping the bar as close to the body as possible in order to allow you to be in total control of it.

Once the bar has reached the peak of the pull, perform a shrug like motion of the shoulders to pull it even higher.

As you are about to receive the bar, you should be in a semi-squat position, emphasising how low you should be. Once this is done, quickly pull yourself underneath the barbell. Once under, lift the barbell overhead immediately.

Once the barbell is locked out (arms are fully extended at the elbow joint), you should be able to stand completely upright with the barbell over your head, similar to the military press position.

In order to prevent aggravating fellow gym goers, aim to lower the bar in a controlled manner; throwing it to the ground can distract other people training and potentially injure those around you.

Practice Set: 1 Set of 5 reps with a wooden stick or Olympic barbell.

Rest: Rest for 5 minutes / 300 seconds in between sets to ensure maximal energy replenishment.

Hydrate: dehydration is one of the most common causes of fatigue/injury.

Recap on Performing the Barbell Snatch

2) Chest and back remaining in same position, drive powerfully through the heels.

3) Generate the triple extension and pull the barbell as high as possible and as explosively as possible. Keep the bar close to you at all times.

4) At the peak of the pull, shrug the bar to pull it even higher.

5) Pull yourself under the barbell and you should be in a semi squat position. Once under, lift the barbell overhead explosively.

6) Once arms are locked out, stand completely upright with the barbell overhead and arms straight. This is the finish position.

7) Lower weight in a controlled way.

Stay athletic, functional and powerful! Be an aesthetic athletic.

– The first male world champion was crowned all the way back in 1891 and the height/weight classes did not exist!

– Behdad Salimikordasiabi (105+ KG weight class) of Iran smashed the record in Paris, 2011 and boasts a staggering snatch of  214KG. However, smaller guys can do it too; Wu Jingbiao (56KG) of China snatched an astonishing 139KG in Houston, 1989.

– Due to not warming up, unfamiliar technique and overestimating capabilities, olympic lifting holds a statistic of 1-4 injuries every 1000 hours. So be careful when snatching away!

6 Exercises For A Rugby Player Body

How To Fuel The World’s Hardest Home HIIT Workout |…

When To Take BCAAs