These individuals contort their bodies in such a way to use this unusual contraption to squash and crush their muscles… and for what reason?

Let’s get down to bare facts of when, why and how you should use this bit of kit, before outlining the top 5 areas where the roller can really work its magic!

Why May You Need It?

Every physiotherapist, osteopath, chiropractor and personal trainer may have a different explanation as to how and why foam rolling helps us!

Tightness can lead to physical movement restrictions as your muscles change their levels of tension or even shorten in length.

This may, but not always, lead to a muscular imbalance and a “dysfunction” which (again) may lead to pain (1).

To be honest, the jury is still out on that question. However, some nice research indicates that there IS likely to be more to foam rolling than squashing tissue and allowing re-hydration. 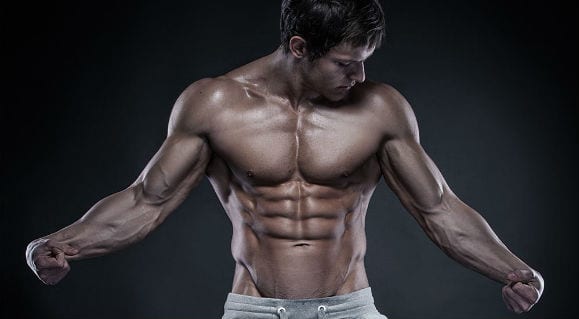 For example, Chaudry et al. (2) demonstrated that it is fairly inconceivable that fascia tissue could be biologically altered with massage therapy. The strength of the fascia is so tough, that forces applied would not be great enough!

Similarly in muscle tissue the whole notion of trigger points as areas of sustained muscle contraction which can be “released” is debatable (3). In fact it has been demonstrated that even the world’s leading experts struggle to locate these trigger points reliably (4), and it is more likely that these areas are points of peripheral nerve inflammation or muscle ischaemia (3).

? 2 minutes of foam rolling has shown to increase flexibility and range of motion with no reduction in muscular strength (which you often see after static stretching) (5), which makes it a good choice for bodybuilders and sports people.

Especially considering it has been shown to be just as effective as traditional stretching exercises (6) – however, don’t expect a world of difference after a one-off foam rolling session! (7)

? It has also been shown to reduce post exercise fatigue levels and may be able to extend work out time and volume (8) after 5 minutes of rolling. 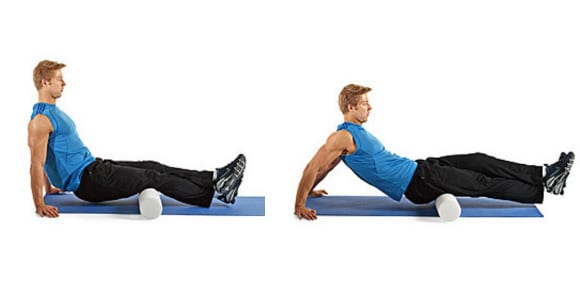 A large muscle group at the back of the thigh, the hamstrings work to bend the knee and extend the hip. They are in fact a group of 3 muscles (semitendinosus, semimembranosus and biceps femoris) and work alongside the gluteal, low back extensor and calf muscles to form the posterior muscle “chain”.

This group of muscles is important firstly because as individuals we spend a lot of time sitting (which neglects this chain and encourages weakness), and secondly because they have a key role in triple extension movements commonly seen in the gym (e.g. deadlifts, squats) and in sport (e.g. running and jumping).

TOP TIP 1
Consider foam rolling for groups of muscles rather than just single muscles. Roll out on all the posterior muscles in one sitting to ensure the posterior chain muscles and fascia are all provided with similar input (4). Then group together anterior chain muscles (quadriceps, abdominals, hip flexors) are repeat the process again. Feel free to do both sides at the same time if you can as the outcome will be the same (9).

As suggested it is important to have balance to your rolling regime and to spend time to work muscles both at the front and the back of the body. The quadriceps are a large group of 4 muscles at the front of the thigh which predominantly straighten the knee.

TOP TIP 2
All the evidence suggests a standardised protocol of small movements where you undulate back and forth over specific areas (10). Try NOT to apply a long duration pressure as you slide all the way up and down the entire muscle. Instead keep the movements short (1-2 cm) where you apply pressure and then take it off before changing position slightly.

If you spend a lot of time walking or running it is likely you have substantial size calf muscles. This is because they take a lot of load and are used often throughout the day.

A group of 2 muscles (although one is divided into two portions) the calf muscles (gastrocnemius and soleus) allow us to point our foot and propels us when walking/ running.

TOP TIP 3
Another often described component of “correct” foam rolling technique is to move from proximal to distal when applying pressure. Essentially this means from the centre of the body outwards. In the case of the calf muscles, start at the top (near the knee) and work slowly downwards (to just before the Achilles tendon above the heel).

Also known as the “QL”, you have two of these muscles, one on either side of your lower spine. It runs from the side of the lower lumbar verterbrae to the top of the pelvis on either side, and when it contracts it either causes the spine to extend (both together) or side flex (one side only).

It is also important as it is a key postural muscle which sustains upright posture when standing and is often over worked! Applying pressure in this region will also hit underlying muscles such as multifidus and the erector spinae.

TOP TIP 4
It is essential to vary pressure as you rock on top of the roller. A degree of pressure into pain should be followed by lighter pressure which is more tolerable. This helps facilitate your body to react to the pain and in essence teaches your nervous system that not everywhere is as painful as certain other bits! This helps reduce tissue sensitivity and pain.

The most commonly discussed fascia is the iliotibial band which runs from the outside of the pelvis down the lateral leg to the knee.

To be truthful this is the only specific example of a fascia that I will suggest you give attention. This is due to the size of this tissue. It runs all the way from the outer pelvis to the lateral knee. Attention should be focused on the area just above the level of the knee cap!

This area is also important because it sits on top of the lateral quadriceps muscle and makes it relatively difficult for these muscles to get stretched fully. Rolling this area will also hit those underlying muscles.

TOP TIP 5
Foam rolling probably will not work as a one off. Rather it is best utilised 2-3 times per week as the amount of cumulative exposure is important (7).

You do not need to spend all day torturing your self. The evidence I have cited throughout this article suggests between 2 minutes to 5 minutes per specific area, and I personally recommend only 2 minutes on each side per area throughout the anterior and posterior chains.

Approximately 20 minutes (MAX) 2 or 3 times per week is optimal.

Certain areas of your body should be avoided if you don’t want to be limping around after your session.

Found as a bony prominence on the outer side of the thigh bone, just below the pelvis. There is a nice fluid filled sac (a bursa) there with lots of sensitive nerve endings. Stay clear!

Right in the back of the knee there is a little muscle which can get tight, but is extremely sensitive. Sometimes a bit of pressure here can make it worse. Let a professional sort this area out.

Found on the inside of the thigh. This is fine if you are at home, but it’s not something I want to see at the gym. It sucks to stretch your groin muscles but just do it. Please.

Foam rolling is a real thing, which has real benefits.

It is as least as good as static stretching and can be performed without detrimentally effecting performance.

However, it may not work as we initially thought it did and we don’t need to spend all day doing it.

So, if you are tight and sore from training or work, give it a go- you may be surprised with the results!

Mental Resilience For Success & The Ultimate…

Pesticide Use Linked To Weight Gain In Mice, Study Reveals

Tabata Workout Plan | How to Lose Weight with Tabata