The gym and an LGBTQ+ rugby team are what saved NHS worker Chris Hibbert. This week on the Myprotein YouTube channel we got some insight into his journey of learning to love and accept himself.

As a young, gay man who suffered relentless bullying, Chris was at odds with his own identity, and a state of severe ill health.

With time, Chris took control of his health and along the way found the confidence to be authentically himself.

This is Chris’ story.

Whilst battling with a lot of confusion over his sexuality from a young age, Chris dealt with ruthless bullying in his school days. But he also explains how a lot of the abuse came from himself. Chris says “I didn’t care about my appearance…I wanted to make myself as ugly as possible. I didn’t want other people to get close to me”.

After struggling through school using food as his “drug of choice” to cope, at 22 Chris had his wake-up call following a migraine he suffered through for a few weeks. When he visited the doctor, he was told that the migraine was his body’s way of warning him about a stroke. The doctor went so far as to warn that if Chris carried on the way he was, he’d be dead by the age of thirty.

This was his wake-up call and what landed him in the gym.

“Don’t ever stop banging your drum and being yourself”

Chris felt at home in the gym from the moment he stepped inside. It gave him the confidence to try things he’d never dreamed of trying before, one of them being rugby. After discovering a gay rugby club in London, the world of LGBTQ+ rugby opened up, and Chris found a club in Manchester that was perfect for him – The Spartans.

Chris explains that the Spartans and clubs like them across the UK take “all shapes, all sizes, all abilities”, it’s just about having fun. Chris has found his tribe in the Spartans, and they’ve empowered him with the confidence to do things he once would’ve thought of as impossible. Chris now even has the confidence to sing and dance on a stage in front of as many as 4000 people at the regular Spartan’s events. 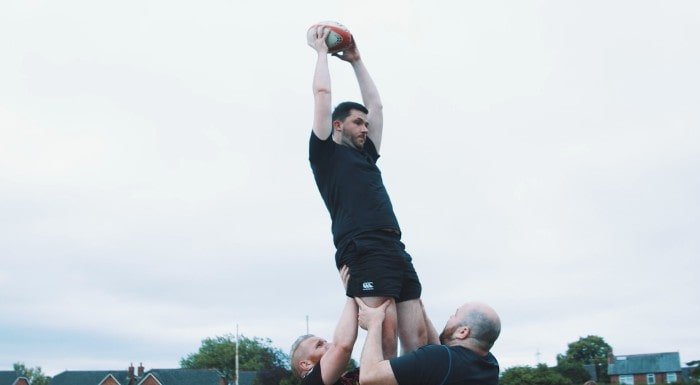 Chris’ authenticity and his journey to self-acceptance is inspiring to all of us. After once feeling “disgusted” at who he was, his confidence is now clear, and he’s found a community that not only welcomes but celebrates its members for who they are.

Get Chris’ full story on our YouTube channel and check out some of our other videos with more inspirational stories.

Fight Off Calories | 12 Rounds Of Boxing

How To Keep Fit Around Your Busy 9-5 | Hells Fitness

How To Start Meditating | 5 Steps For Beginners

Top Snacks & Supplements For Nutrition On The Go