As part of our #OwnTheSummer campaign, we’ve been trying out alternative fitness classes to not only push ourselves out of our comfort zones, but to mix up our training schedules with something fresh and exciting — with the bonus of potentially learning a new skill or two.

Last week, I decided to flip my fitness routine on its head (quite literally) with a two-and-a-half-hour handstand session led by Adrian Conway at One Yoga in Chorlton.

Now, I can probably guess what you’re thinking — the last time you attempted a handstand was in a playground, right? Well, you’d be very wrong to assume that this session was child’s play though, as I quickly found out for myself.

Adrian’s class was an unexpectedly tough mixture of stretching, flexibility & conditioning exercises, headstand and handstand practice, and then a quick blast of core strength to finish. It only took a few minutes for me to feel really out of my depth… and properly sweaty.

After getting us properly warmed up, Adrian demonstrated the correct form we should be aiming for when upside down and got us to practice planking, as holding a handstand requires having solid core strength to stabilise yourself, and keep your body in as straight a line as possible.

He then eased us into the idea of being upside down with a bit of paired headstand practice. 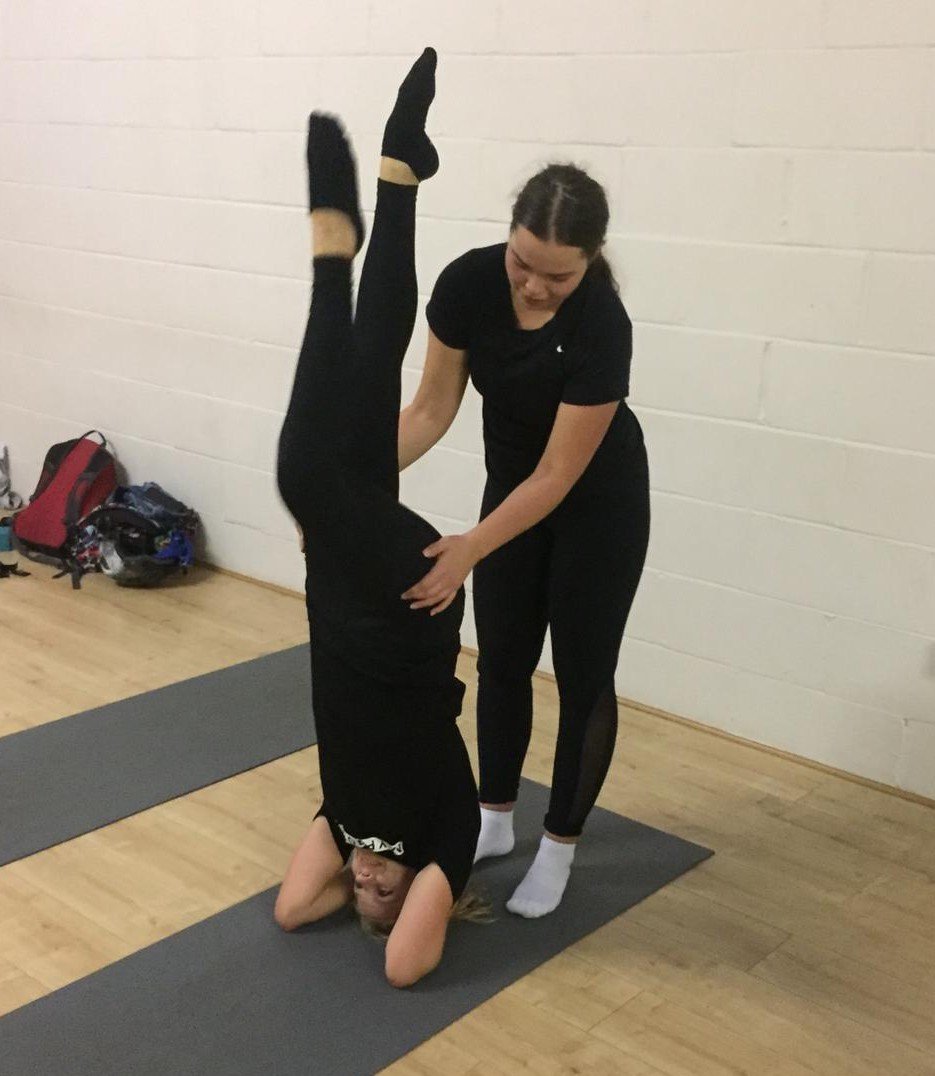 This involved making a solid ‘tripod’ base with your head and forearms on the floor, elbows slightly pointed out, and hands clasped around the back of your head.

That was simple enough… but getting your legs to a position where they were vertical in the air wasn’t.

My whole body shook with the effort of raising them, and I realised my abs were going to be feeling this the next morning.

After a little while, we were ready to progress to handstands. Adrian demonstrated getting up to a handstand position in a controlled way, using a “L kick” — which is a slow lunge forward with your dominant leg.

This was another key difference to the handstands I was used to back in the playground days, where I would literally fling my whole body forward without hesitation (like only children can).

One of the most impressive things about Adrian wasn’t just his ability to hold a perfect handstand for an extended period of time, but actually the fact that he could somehow ease himself upside down with such little momentum — he could literally just lean into the ground.

A post shared by Adrian Dolphin Conway (@adriandolphinconway) on Aug 8, 2019 at 2:24pm PDT

I was able to get myself fully upside down, which was definitely an achievement in itself, however I could only hold this for a fraction of a second before overextending one way or just flopping back to the ground.

What I also discovered (and found really difficult), was that my abs were stronger than my back muscles — which meant that instead of being able to hold a strong and stable vertical plank, my back automatically arched, making my handstand bend at the middle.

As you can see in the many attempts below, this made it harder to hold a handstand properly for an extended period of time — as I didn’t have a stable form,  my legs weren’t still either and my body weight slumped down into my shoulders.

Not surprisingly, my underused triceps also let me down after a couple of seconds of being upright. When we began to try “endurance handstands” — which involved holding a handstand for as long as you could, while being lightly supported by a partner to keep you upright — my arms started to shake pretty quickly.

Here’s an example of what a handstand should look like, as showcased by a much more experienced member of the class, Patricia (@patricia_ccowan). Just watch how slow and controlled she is.

More from the expert

Adrian Conway is 40 years old and from Manchester. He currently works in marketing, but recently he’s been moving more towards handstand teaching than his desk job. When he’s not practicing being upside down, he also enjoys gymnastics and yoga.

When & how did you first get into handstands?

I used to play all the usual sports — rugby, cricket, football etc. — but then I badly ruptured my ACL. This lead to sciatica and real problems in my back, and the only thing that worked for me was yoga.

From yoga I actually discovered functional fitness, which I loved, but I loved it even more when I discovered handstand push-ups.

I then started going to various handstand classes and workshops, but it wasn’t until I discovered a real master handstander who had performed at the highest level with Cirque de Soleil that I started to take it more seriously.

I eventually became his assistant so was going round UK and Europe teaching handstands and also doing my own classes at various gyms.

I used to go to classes at Cloud Aerial in Manchester and also travelled around trying different teachers and styles out. I also went to gymnastics classes but the purest style of handstand is the circus one where there’s real aesthetic to it as well.

What would you say are the main benefits of handstands?

Firstly, they’re great fun. I love being on my hands and I’m always trying to improve my technique and open up higher level skills. But they are hard, and require dedication and determination.

I was really lacking in flexibility but my handstand passion has given me a reason to get more flexible. You’ll improve your shoulder mobility, hip flexors, hamstrings, and blood circulation as well as build physical and mental strength.

Would you encourage more people to try handstands?

Definitely. Especially beginners — I was awful at handstands when I first started but I kept at it and never gave up.

I’m not naturally flexible nor am I particularly svelte or graceful — but if you show up and put the work in, 99% of people will be able to hold a nice handstand.

It might take some people longer than others, but in a way I kind of like the fact that it didn’t come naturally to me and I had to work hard to achieve a handstand.

What’s your favourite thing about teaching?

I’ve seen people overcome with joy when they discover that they can do a handstand and I’ve helped them unlock it. That’s the best bit.

If you’re in Manchester on the 1st September, Adrian is running a Strength & Inversion day event at TRAIN.

Handstands are no joke. They’re a seriously underrated full body workout that require you to really focus on core strength and stability. After the session with Adrian I felt achy and tired, but actually quite proud that I’d been able to progress even just a tiny bit from the beginning of the class to the end.

Being able to lift heavy weights is one thing —  but being able to use that strength to stabilise your whole body while you flip fitness on its head is definitely more impressive in my opinion.

Want to try life upside down? Check out Adrian’s class at One Yoga studio in Chorlton or search for handstand training near you.

See some of the other things we’ve tried this summer:

We Tried A Floating HIIT Session, This Is How It Went…

It involved burpees on a floating board... what could possibly go wrong?

I Tried The Total Warrior Obstacle Course… This Is What Happened

Warning: some readers may find the mud in these scenes distressing.

We Tried Aerial Arts | This Is How You *REALLY* Get Fit

Drop the dumbbells, we've found a fun way to get strong.

What is a Depletion Workout?

Carb Blockers | Do They Work And What Are Their Side…

Why You Don’t Need To Detox According To A…

What Is Inositol? | Benefits & Side Effects