Thoughts of creatine are often followed by that of big brawny men, but could creatine for women be a thing too? Although creatine supplements are popular for improving performance, like creatine monohydrate, many think its benefits are just for male gym-goers, or only related building muscle and bulking up.

However, creatine has many potential benefits for women as well – especially those who want to improve their workouts and their overall health. Read on to see how this amino acid can provide the extra boost you’re looking for.

Get the full creatine low-down from our expert below…

Creatine is an amino acid that’s found in common food sources such as meat and fish, and is stored in the muscles. It’s a popular workout supplement proven to increase performance and muscle growth.1

Some of the creatine in the body comes from food and some is made in the kidneys and liver.2 Because a normal diet only provides small amounts each day, taking creatine supplements pre-workout can be perfect for boosting levels of creatine in the muscles for maximum results.

How does creatine work?

Creatine works by helping the body to use the energy stored in the muscles when you take on high intensity exercise (think lifting, sprinting, jumping, etc.).2 This means you can work harder, lift heavier, and feel less tired during your workouts.

In addition to boosting performance and muscle mass (in the long term), creatine has other beneficial effects. Creatine supplementation can help the muscles recover faster after a workout by helping to restore optimal levels of stored creatine, helping to regulate your body temperature, and preventing injury.2

Benefits of creatine for women

While women often have the same exercise goals as men (increasing strength, power, and performance), some might worry that creatine supplementation could make them look bulky or bloated. However, creatine can be just as beneficial for reaching workout goals for women as it is for men. 3,4,5

One study showed that female athletes who supplemented with creatine not only had greater upper body strength, but also had a significant reduction in the percentage of body fat after five weeks of supplementing.3

Another study also showed significant increase in lower body strength for women taking creatine without significant weight gain (no “bulking” effect).4 The impact of creatine for women on performance in high intensity exercise (like cycling) shows equal benefit for men and women.5

Vegetarian and vegan women who supplement with creatine may see an even greater impact on their energy levels and performance, since many food sources of creatine are animal based.2

Beyond the exercise-related benefits of creatine, the other health effects are that it may help with slowing the progress of neurological diseases, and could potentially protect the heart muscle during heart attacks.2

Other promising potential uses of creatine supplementation show benefits throughout the ageing process, related to strengthening muscle mass (which usually declines with age) and improving bone health, which is crucially important for women.2

Women have less bone mass then man and are more prone to osteoporosis (which makes bones brittle and weak) as they age.3 One study even showed that creatine supplementation can slow bone loss in women.6

Why should women take creatine?

Its’ use in exercise and sport has been extensively studied and repeatedly proven to be effective in boosting athletic performance.

As mentioned earlier, creatine for women can help to build muscle and also reduce fat mass, leading to a long-term change in body composition.3 This can result in weight loss in two ways — the short-term loss of fat from better workouts, and the addition of lean muscle — which burns more calories overall. 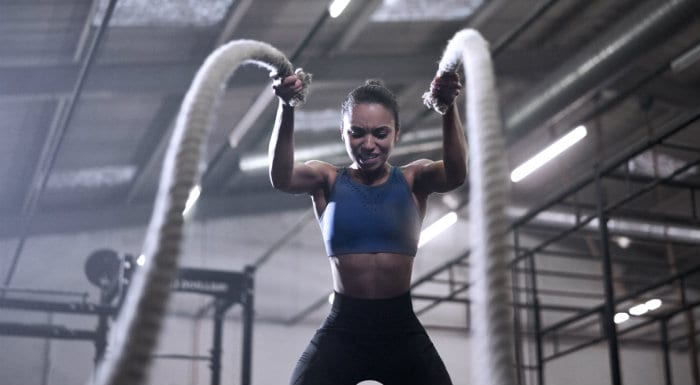 Safety and concerns of creatine for women

Creatine is one of the most well researched supplements that continually shows beneficial effects with no safety concerns.2 Extensive study on the use of creatine has shown no health risks, little side effects, and many potential health benefits for healthy individuals who use it regularly as a supplement.2

Following the recommended dosages (discussed below) will help to minimise any potential side effects.

i. What dosage is best

When deciding what dosage of creatine is best for you, it’s important to consider how long you have been using a creatine supplement and for how long you plan to continue to use it. This is because it takes a larger dose initially for the body to maximise creatine stores, and then smaller, more frequent dosages to keep creatine at the optimal level in the muscles.2

A study that saw reduced GI side effects with creatine supplementation recommends taking two smaller doses (typically 3-5 grams) of creatine per day instead of one larger (6-10 grams) dose.7 Dosage also depends on your body size, as well as your diet — vegetarians and vegans may need higher dosages to maximise muscle stores.2

ii. Does creatine cause bloating?

More than men, women in particular might have concerns about potential bloating from taking creatine. Creatine plays a role in increasing intracellular fluid (water between the cells), which can make muscles look more defined — some people worry this will cause fluid retention overall, but this isn’t the case.7

There may be an increase in total body water (which means optimal hydration) from continuous supplementation, but taking the recommended dose twice a day was shown to minimise potential gastrointestinal (GI) discomfort and stomach bloating.7,8 If you’re experiencing bloating, it might be due to something else in your diet, or the amount of salt that you’re consuming.

iii. Can you take creatine while pregnant?

Since creatine is considered a safe supplement for most individuals — some female athletes may already be taking it regularly when they become pregnant. Because of the beneficial and protective effects that creatine has on the body, there’s some thought to a potential benefit of creatine supplementation during pregnancy.9

Women’s bodies and their nutritional needs change (and increase) during pregnancy, especially in pregnant athletes. However, the impact of supplementation on a developing foetus isn’t well known. There’s not much research done on creatine in pregnancy, so it’s best to speak with your doctor before taking any supplements if you suspect you’re pregnant.

Hopefully, this article has shown you why you should make creatine a regular feature in your training routine, but we’re about to show you how, too.

If you’re after a super-convenient, quick fix then you can always just take some of our Creatine Monohydrate tablets, or add a scoop of our Creatine Monohydrate powder straight to water or juice. Our creatine powders come in refreshing flavours like Berry Burst and Tropical so they are great on their own, but to take your shakes (and workout) to a whole new level try this delicious fruity recipe.

Get Fruity With Your Creatine | Super-Tasty Smoothie Recipe

What better way to power your progress in the gym?

Creatine is a popular performance-enhancing supplement to benefit both male and female athletes. There’s no need to be concerned about getting too bulky or bloated as these myths have been disproven.

Creatine can help increase your workout performance, muscle tone, and even help to lose fat mass. There’s no reason why women shouldn’t consider adding this powerful amino acid to their pre- and post-workout routine.

5 Best Supplements To Pack For Your Summer Holidays

A Guide to Juice Diets | The Benefits & Risks of Juicing

Xylitol | What Is It? What Are The Benefits?